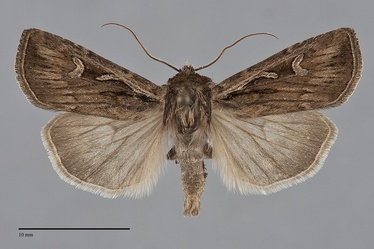 Euxoa agema is a small to medium-sized Euxoa (FW 13–16 mm) that flies in mesic middle to high-elevation forests east of the Cascade summit during the summer. It has a streaky brown forewing with a thin bar-like orbicular spot crisply outlined by black and light gray and filled with a brown line. The forewing ground color is gray-brown, suffused with darker gray-brown surrounding the cell and along the veins in the posterior median and subterminal areas. The apex, subterminal area opposite the cell, and teeth of a W-mark on M3 and CuA1 are tan to gray. The cell is filled with dark brown, and the costa is tan to light gray-tan. A black basal dash is present. The veins near the cell, including the cubital vein, are gray to the postmedial line in some specimens, while the other veins are black. The transverse lines are relatively inconspicuous. Paired faint gray spots mark the origins of the antemedial and postmedial lines on the costa. The antemedial line is usually visible as a gray and brown line posterior to the cell, convex lateral at the base of the claviform spot and above the posterior margin. No portion of the median line is evident. The postmedial line is very faint, dark gray, scalloped on the veins, but most evident as the transition from dark near the cell to the lighter subterminal area. The subterminal line is gray-tan, faint or absent, and slightly irregular, with a mild to moderate "W" mark on the mid-forewing. It is preceded by a dark gray shade on the costa and a series of long black wedges between the veins on the mid-wing. The terminal line is black. The fringe is dark gray with a tan base. The orbicular and reniform spots are outlined crisply in black outer and thin light gray inner lines and are filled with the ground color. The orbicular spot is very thin, bar-like, nearly horizontal, with the filling reduced to a thin line. The reniform spot is C-shaped, usually with a gray spot at the lower end. The claviform spot is black, small to moderate-sized, very narrow, filled with brown. The hindwing is whitish gray with an ill-defined darker gray band on the outer third, with gray discal spot, veins, and terminal line. The hindwing fringe is white with a light gray base. The head and antenna are gray-brown to brown, with a black line across the mid-collar. A frontal tubercle is present. The male antenna is biserrate. Euxoa agema is placed in the large subgenus Euxoa.

This species and the closely related Euxoa olivalis are recognizable by the combination of relatively small size, brown color, pale costa, and narrow bar-like orbicular and C-shaped reniform spots that are outlined in black and pale gray. Euxoa agema is more restricted in habitat preference than E. olivalis, preferring mesic montane forests. Euxoa agema is darker and richer brown with darker costa and fewer gray streaks than E. olivalis, and its orbicular spot is usually narrower with a thinner linear dark central streak. Males of these species can be differentiated by the lengths of the saccular extensions after brushing the scales from the tip of the valves. Those E. agema reach the ventral cucullus while those of E. olivalis extend further distally and appear to curl around the "heel" of the cucullus. Euxoa agema is unlikely to be confused with other Euxoa or unrelated moths in our area.

This species is widely distributed in spruce-fir, quaking aspen, and pine forests throughout much of western North America.  In the Pacific Northwest, it is relatively rare and sporadic, and is most frequent in middle to high-elevation conifer forests.

Euxoa agema has been found in forests in eastern Oregon and southern Idaho in the Pacific Northwest. Several records are shown for southern British Columbia on the Moth Photographers Group website although Lafontaine (1987) gives the northern limit as northern Oregon and central Idaho.

This species is predominantly distributed in the mountains in and adjacent to the Great Basin as well as in southern California. These include the central Rocky Mountains from Colorado to western Montana and east-central Idaho, the Wasatch Plateau in central Utah, the Ruby Mountains of northeastern Nevada, the Sierra Nevada, and Transverse Ranges of southern California.

No information is presently available regarding larval foodplants of this species, but it is probably a soil-surface feeding cutworm that feeds on general herbaceous vegetation based upon related species.

The flight period of this species is mid to late summer. Pacific Northwest specimens have been collected from late July to late August. It is nocturnal and comes to lights.