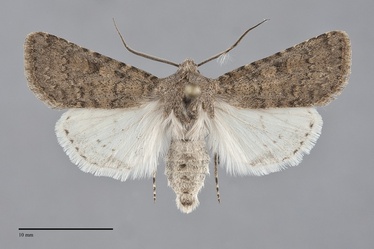 Euxoa mitis is a fall-flying, small to medium-sized Euxoa (FW length 14–16 mm) that flies in sage steppe. It has relatively smooth, gray-brown forewings with a slight orange tint, gray markings, and white hindwings which are powdery and darker in females. The forewing is relatively short. The ground color is relatively uniform, slightly grayer in females. The forewing is slightly powdery, although less than in many steppe Euxoa species. The costa near the subterminal line is gray, as is the cell in most specimens. The transverse lines and outlines of the spots are gray, slightly variable in darkness but less so than in many of the other steppe species. The basal and antemedial lines are double, darkest abutting the median area, filled with the ground color. The antemedial line is slightly irregular and slants toward the outer margin. The median line is absent or weak. The postmedial line has a dark inner component that is most strongly toothed on the mid-forewing and is bordered laterally by a lighter line; it is drawn basad on the costa, is nearly straight lateral to the reniform spot, and straight or slightly concave from below the cell at a 45° slant toward the base to the posterior margin. The subterminal line is yellow-tan, powdery, usually complete but sometimes broken into spots, slightly irregular and slightly scalloped. It is preceded by a dark gray spot on the costa and a weak gray shade on the mid-forewing. The terminal line is a series of dark spots. The fringe matches the terminal area. The orbicular and reniform spots are weakly outlined in gray, except where they abut the dark cell, are moderately large, and are evenly filled with the ground color or a slightly lighter shade thereof. The orbicular spot is oval and the reniform spot is broadly kidney-shaped. The claviform spot is absent or represented by a few gray scales at the tip. The hindwing is pure white with a spotted terminal line in males, uncommonly with slight marginal suffusion and a trace of the postmedial line; off-white with brown-gray suffusion and gray discal spot, postmedial line, and spotted terminal line in females. The hindwing fringe is pure white in both sexes. The head and thorax are evenly of the forewing color. A frontal tubercle is present. The male antenna is bipectinate. Euxoa mitis is a member of the large subgenus Euxoa.

This species can be identified by its late fall flight period, relatively short forewing, orange-tinted gray-tan forewing with gray filling of the cell and other markings, and white hindwing. It resembles several other fall-flying brown Euxoa species, particularly Euxoa difformis, Euxoa misturata, and Euxoa cona. Euxoa difformis has a similarly colored forewing, but its hindwing has a scalloped postmedian line and darker marginal shade with a small light area near the anal angle. Euxoa misturata is another common steppe moth. It is very variable in color, but is grayer than E. mitis without a warm tone to the forewing, and its spots are smaller and contain central dark filling unlike those of E. mitis. Euxoa cona, an uncommon species from desert badlands, larger and has a long wing with a more pointed apex than E. mitis. It is also more powdery and has a more strongly oval orbicular spot. Euxoa moerens is a smaller moth that flies in steppe in the southern parts of the Northwest region. It is more strongly powdered than E. mitis and has a darker hindwing.

This species is widely distributed throughout much of western North America on arid grasslands and rangelands, including dry short-grass prairie on the Great Plains and sagebrush steppe west of the Rocky Mountains.  In the Pacific Northwest, it flies in low-elevation sagebrush steppe.  It is usually moderately common even during wet years, but may become particularly abundant during drought years.

Euxoa mitis is found in the dry interior of the Pacific Northwest as far north as the southern part of British Columbia. It is restricted to the driest part of the Columbia Basin in Washington, usually near the Columbia River, but is more widely distributed in eastern Oregon. It has not been recorded from Idaho.

The range of Euxoa mitis extends includes the western Great Plains and the Intermountain region. It extends east to Saskatchewan and the western edges of North Dakota and Nebraska, then south to New Mexico. Further west is occurs south to central Utah, south-central Nevada, and eastern and southern California.

The adults of E. mitis fly in the fall and have been collected in September and early October in our region. They are nocturnal and come to lights.