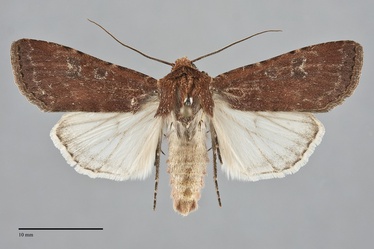 Euxoa mimallonis is a moderately large Euxoa (FW length 17–20 mm) that flies east of the Cascades during summer and early fall. It has pale hindwings and even bright red-brown forewings with ochre-rimmed dark gray spots. The forewing color is dull red-brown, usually grayer and slightly darker in the terminal area. The transverse lines are inconspicuous, double gray spots on the costa and evident as slightly lighter filling or absent across the rest of the forewing. Only the pale subterminal line is evident as a powdery yellowish line in some specimens. The orbicular and reniform spots are variable in prominence, usually relatively inconspicuous but sometimes more evident, outlined in light ochre and filled with a pale to dark gray shade of the ground color. The orbicular spot is usually round, sometimes oval. The reniform spot is kidney-shaped. The claviform spot is absent. The hindwing is white or whitish gray, usually with dark veins and terminal line in males, rarely with a slight marginal shade; slightly darker in females with a gray marginal band on the outer third. The head and thorax are uniformly of the same color as the forewing. The male antenna is weakly bipectinate. Euxoa mimallonis is one of four Northwest species assigned to the subgenus Palaeoeuxoa, defined by the presence of spatulate tips of the saccular extension and harpes of similar or greater length in males. All of these species are relatively large and have reddish brown forewings in our area.

This moth can usually be identified by its uniform bright red-brown forewing with ochre-lined spots in combination with a white hindwing in males and peripherally banded hindwing in females. Other species in the same subgenus, such as Euxoa biformata, Euxoa intermontana, and Euxoa shasta, have duskier forewings and/or darker hindwings in both sexes. Other red-brown Euxoa species like Euxoa ochrogaster or males of Euxoa adumbrata, have darker hindwings.

Euxoa mimallonis is geographically variable in North America. Populations from east of the Cordillera are bright red and are the nominate subspecies, while those from further west have gray and red-brown forms and are assigned to subspecies E. m. gagates (Grote). Only red-brown individuals have been examined from the Northwest.

This species is widely distributed in open forest and grassland habitats east of the Rocky Mountains. In the Pacific Northwest, it is most common in dry, open ponderosa pine forests and juniper woodlands at middle elevations east of the Cascades.  It also occurs in spruce-fir forests at higher elevations in the Cascades, but is less common in this habitat.

Euxoa mimallonis is widespread in our area east of the crests of the Cascade and Coast Ranges, occurring as far north as southern British Columbia. It is not found in the most arid steppe regions.

This species is widespread in North America, occurring from coast to coast. It is most prevalent in the West where it has been found from the Northwest and central Alberta south to southern California, northern Arizona, and New Mexico. The range extends eastward in a relatively narrow band in the northern United States and southern Canada to Nova Scotia and New England.

The flight period of E. mimallonis is summer and early fall. It has been collected from early July to late September in our area, with a peak during August. It is nocturnal and comes to lights.