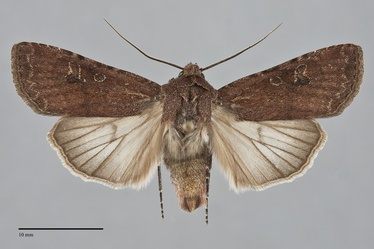 Euxoa biformata is a moderately large Euxoa (FW length 18–20 mm) that flies along the east slope of the Cascades during late summer and fall. It has uniform, dark red-brown forewings marked with pale-lined orbicular and reniform spots and sexually dimorphic hindwings -- white with a gray marginal band in males, and darker gray in females. The forewing color is nearly uniform dark red-brown, slightly darker and grayer in the terminal area and in the adjoining distal subterminal area. The basal, antemedial, and postmedial lines are usually faint or absent except as double gray spots on the costa or as segments of the lighter filling. When strongly evident the antemedial line is double, gray, filled with a slightly paler and gray-tinted shade of the ground color, slightly irregular and angled weakly toward the outer margin. The median line is absent. The postmedial line is weakly toothed on the veins, drawn toward the base on the costa, smoothly excurved around the reniform spot, and straight or slightly concave at an oblique angle toward the base below the cell. The orbicular and reniform spots are weakly outlined in gray and peripherally lined with powdery pale yellow scales, filled with the ground color or a slightly darker and grayer shade thereof. The orbicular spot is small to moderate-sized, round. The reniform spot is kidney-shaped or boomerang-shaped, often filled with yellow across its mid-portion and darker gray in the lower end. The claviform spot is absent or evident as a few pale scales. The hindwing is pale whitish gray with a moderately well-demarcated marginal band on the outer third in males, with a similar pale base but more extensive gray in females. Dark gray veins, discal spot, and thin terminal line, and white fringe with a gray base are present in both sexes. The thorax matches the wing color, while the head is slightly more orange. The male antenna is weakly bipectinate with long fasciculations. Euxoa biformata is one of four species in the subgenus Palaeoeuxoa. This subgenus is characterized by the combination of spoon-shaped tips of the saccular extensions and harpes of equal or greater length in males.

This species can be associated with the subgenus Palaeoeuxoa by its relatively large size for a Euxoa, dark red-brown forewings with markings limited to pale-filled spots, and pale hindwings. It is the most enigmatic of the four species in the subgenus in our region because it resembles closely Euxoa intermontana and Euxoa shasta. It is possible that some of specimens identified as E. biformata in our region are actually one of the other species, most likely pale specimens of E. shasta. The forewing color of E. biformata is redder than those of E. intermontata and its hindwing is darker. The forewings of E. biformata are slightly darker brown than those of E. shasta. Its hindwings are darker, without smoky gray on the basal portion in males as in E. shasta. Females are most difficult to identify with certainty since both species have dark hindwings. Euxoa shasta females are slightly larger, slightly more powdery and lighter red, and have slightly darker gray hindwings. Lafontaine (1987) describes subtle differences in the shapes of the distal harpes of the male genitalia in these taxa, but there are no structural differences between the females. Other moths with red-brown forewings have either white or dark gray hindwings.

This moth flies in dry conifer forests at middle elevations. It is usually uncommon.

Euxoa biformata is found in the Cascade Range in the Pacific Northwest, mostly east of the crest. It has been collected from south-central British Columbia to southern Oregon.  Isolated records exist for eastern Oregon.

The range of this species extends south in California to the Transverse Ranges in the southern part of the state.

The adults fly in late summer and fall, beginning in mid-July.