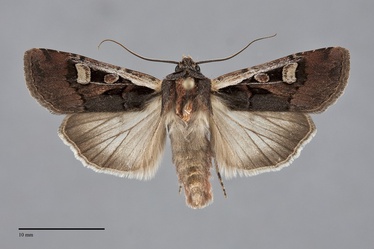 Euxoa obeliscoides is a distinctive, red-brown, small to medium-sized Euxoa (FW length 14–18 mm) that flies in a variety of dry habitats during late summer and fall. It has a pale costa, yellow reniform spot, burnt-orange orbicular spot, and black cell. The forewing is smooth red-brown, darker gray-brown along the posterior forewing medial to the postmedial line and in the terminal area, cream on the costa to the postmedial line, and black in the cell and lateral to the reniform spot. A thick black basal dash is present, similar to the moderately large claviform spot. The cubital vein is thinly covered by pale scales near the spots. The antemedial and postmedial lines are dark gray and black filled with the ground color, but are only evident posterior to the cell. The subterminal line is pale but very faint, mostly evident as the transition between colors on the distal forewing. A row of black spots forms the terminal line. The orbicular and reniform spots are outlined in black. The orbicular spot is oval, filled with light yellow or burnt-orange. The reniform spot is moderately large, filled with light yellow. The hindwing is whitish gray with a moderately well-defined gray marginal band in males; medium-dark brown-gray with darker gray toward the margin. The hindwing fringe is white with a darker base. The head and collar are purplish gray with a black transverse line on the collar. The central thorax is orange, and the tegulae are purplish gray with orange-brown medial edges. A frontal tubercle is present. The male antenna is biserrate. Euxoa obeliscoides belongs to the largest subgenus Euxoa.

This species is identified easily by its red-brown forewing with cream costa, light yellow spots, and black basal dash and cell. It is similar to Euxoa oberfoelli which occurs in the Great Plains, but cannot be confused with any other species in our region.

This species is slightly variable in our region. Specimens from very arid environments in eastern Oregon are washed out and grayer than those from other parts of our region.

This species is widely distributed in a variety of habitats ranging from low to high elevation and in forests to steppe.  In the Pacific Northwest, it is moderately common in native grasslands, oak savanna or oak woodlands west of the Cascades. East of the Cascades, it is common in foothill forest-steppe ecotone and juniper woodlands.  It is common in ponderosa pine forests during drought years, but is usually rare or absent from forest habitats during wet years.  It is sometimes collected in high-elevation spruce-fir forests. This species occurs in canyons in very xeric steppe.

Euxoa obeliscoides is found from south-central British Columbia through the dry interior of the Pacific Northwest. It has a limited range west of the Cascade Mountains, occurring in the Olympic Mountain rain shadow near the Gulf of Georgia and in the Sisikiyou Mountains of southwestern Oregon. It appears to be common in western Montana.

The range of this species extends east to Quebec, New England, and the vicinity of Washington, D.C. through the boreal zone. In the West it occurs on the western Great Plains from central Alberta to Nebraska and southern New Mexico. It is widely distributed in the Southwest to southern Arizona and southern California.

Adults fly from late summer through fall. They have been collected from mid-August to early October in our region. It is a nocturnal species that comes to lights. Some adults have been collected at sugar baits in the eastern Cascade foothills of Washington.