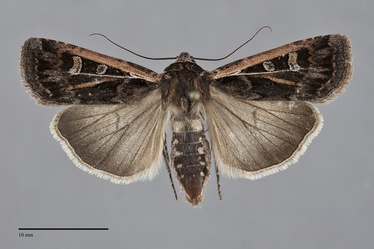 Euxoa flavicollis is a small to medium-sized Euxoa (FW length 14–17 mm) that flies in northern Washington and British Columbia during the summer. It has a dark gray-brown forewing with a yellow costa and fold, white veins outlining a black cell, and forewing spots sharply outlined by black and white. The forewing is often rectangular with a squared-off outer margin. It is dark gray-brown, black in the cell, with a paler ochre-brown fold in the median area and subterminal area. Darker shading is present on the costa and along the veins in the subterminal area. The costa is light ochre to orange yellow costa from the base to the postmedial line. The cubital and proximal or entire radial veins are thin whitish gray. The antemedial line is black and brown, irregular and angled strongly toward the outer margin below the cell. The median line is absent. The postmedial line is gray and mildly scalloped, sometimes with a very weak gray outer component, drawn sharply toward the base on the costa, bluntly excurved around the cell, and angled 45° toward the base below the level of the cell. The subterminal line is ochre, powdery, nearly straight except for a slight offset below the apex. It is preceded by multiple black wedges that are sometimes fused into larger dark gray marks centered on M3 and in the fold. The orbicular and reniform spots are outlined in black with an ochre lining and are filled with the ground color. The orbicular spot is a small circle or slightly larger slanted oval and the reniform spot is kidney-shaped. The hindwing is light gray with an ill-defined smoky marginal band, thin discal spot, veins, and darker terminal line. The hindwing fringe is white with an incomplete gray base. The head and most of the thorax are dark brown. The base of the collar is bright yellow or orange like the costa, separated from the darker edge by a thin black line. A frontal tubercle is present. The male antenna is bead-like, very narrow for the genus.

This species can be identified by its summer flight period, dark brown color, yellow or orange costa, white veins abutting the cell, and pale lining of the forewing spots. It is the darkest of several similar species in the subgenus Orosagrotis. It is most likely to be confused with Euxoa ridingsiana, a slightly smaller species that is rare in our area. The costa and base of the collar are pale brown and often streaked in E. ridingsiana as opposed to solid yellow in E. flavicollis.

This species is primarily found in short-grass prairie and aspen parklands across central Canada, but extends southward in forests of quaking aspen and conifers through the Rocky Mountain region. It is found in mesic conifer forests in the north Cascades and Okanogan Highlands in northern Washington where it is uncommon.

Euxoa flavicollis is found throughout most of British Columbia. The range extends south to the Blue Mountains of southeastern Washington in the Pacific Northwest.

This species is predominantly found in northwestern North America. The range is extends from southern Northwest Territories to southern North Dakota in the Great Plains and Colorado and Utah in the Rocky Mountains. It reaches its southern limit near the West Coast in Washington.

This species flies during the summer and early fall. Pacific Northwest records extend from mid-July to late August. It is nocturnal and comes to lights.