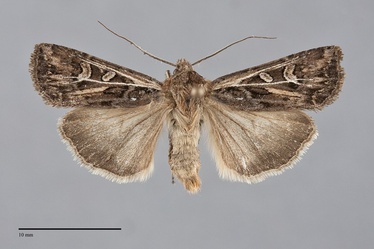 Euxoa maimes is a small Euxoa (FW length 13–16 mm) that flies in dry forests during the summer. It has a dark gray-brown and ochre-tan forewing with light gray veins lining the cell, pale-filled spots, and a two-toned off-white hindwing. The forewing is relatively short and narrow with a truncated outer margin. It is gray-brown. The costa is dull ochre-tan striped with light gray veins and darker brown. A dull yellow streak is present in the fold and the subterminal area is streaky yellow tan and darker gray-brown. The radial and cubital veins and their proximal branches are pale gray. The terminal area is brown-gray. The antemedial line is brown and black, irregular and angled strongly toward the outer margin below the cubital vein, often bulging far lateral between 1A+2A and the posterior margin. The median line is absent. The postmedial line is gray followed by ochre-tan, weakly scalloped, relatively faint, pulled far basad on the costa, bluntly excurved around the end of the cell, and angled 45° toward the base below the level of the cell. The pale ochre subterminal line is powdery, often broken into spots, slightly irregular. It is preceded by a blackish gray shade on the costa and multiple black wedges opposite the cell and in the fold. The terminal line is dark gray, linear or broken into spots. The fringe is gray with a thin tan base. The orbicular and reniform spots are black with a thin lining of light whitish gray, filled centrally with gray. The orbicular spot is round or a tilted oval and the reniform spot is kidney-shaped. The claviform spot is black, moderate-sized and narrow. The hindwing is pale yellowish gray with a fairly well-defined gray marginal band, darker in females, with two-toned gray and white fringe. The head and most of the thorax are dark gray-brown. The base of the collar is brown, separated from the darker edge by a thin black line. A frontal tubercle is present. The male antenna is moderately biserrate. Euxoa maimes is placed in the subgenus Orosagrotis.

This species and Euxoa ridingsiana, a more common and widespread species in our region, can be recognized by their relatively small size, late summer flight, gray-brown forewing with streaky dull ochre costa, pale veins bordering the dark cell, dull ochre fold in the median area, and pale-rimmed forewing spots. These species are difficult to distinguish. According to Lafontaine (1987), E. maimes tends to be smaller and more narrow-winged than E. ridingsiana (FW length 13–16 mm), the antenna of E. maimes is narrowly biserrate and that of E. ridingsiana is wider, and relative percentages of individuals with gray and red-brown color of the thoraxes differs between species. That of E. maimes is dark gray in 90% of specimens while that of E. ridingsiana is dark gray in 50%. Biological differences between them are also known. Euxoa maimes tends to occur in drier grassland habitats and emerges about a week later than E. ridingsiana in areas where the two species are found together. Euxoa ridingsiana tends to occur in forests rather than in grasslands.

This species is endemic to dry short-grass prairie on the northern Great Plains. The habitat in the Pacific Northwest is not known to us at this time (2011).

Euxoa maimes is predominantly a species of the Great Plains where it has been found from Yukon and Northwest Territories to North Dakota and Montana. A disjunct population occurs in the Four Corners states in the southern Rocky Mountain and Intermountain regions.

This species flies from early August to early September across its range (Lafontaine 1987). It is nocturnal and comes to lights.