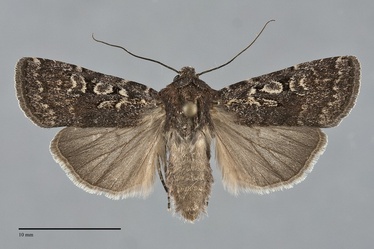 Euxoa satis is a small to medium-sized Euxoa (FW length 13–17 mm) that flies from late spring through summer in a variety of forested habitats. It has a powdery, dark brown-black forewing with black markings that include an elliptical orbicular spot, often with pale, yellowish lining of the spots. The forewing color varies slightly from powdery charcoal gray to very dark brownish black, smooth or powdered with dark or pale scales. Uncommonly, there is a slight reddish or purple tint over the entire forewing. Some specimens with prominent yellow scales in the spots have yellow between the veins in the antemedial, subterminal, and terminal areas. The cell is often darker gray or black. The terminal area is usually not darker. The basal, antemedial lines, and subterminal lines are gray or black, double with strongest components abutting the median area, and filled with the ground color, (gray or powdery light yellow). The antemedial line is slightly irregular and angled slightly toward the outer margin. The median line is usually absent, occasionally faint. The postmedial line is evenly scalloped, drawn toward the base on the costa, narrowly excurved below the costa and then angled 45° toward the base to the posterior margin. The subterminal line is a pale shade of the ground color or yellowish, thin or broken into a series of spot, slightly irregular, preceded by a black shade on the costa and a black or dark brown shade or series of ill-defined black spots elsewhere. The terminal line is thin or a series of black spots. The orbicular and reniform spots are partially outlined in thin dark gray or black peripherally, are lined with pale gray or powdery light yellow, and are filled centrally with the ground color. The orbicular spot is moderately large, elliptical, often open toward the costa or both anteriorly and posteriorly, sometimes lacking a dark outline. The reniform spot is usually incomplete, strongest on the inner side or open anteriorly and posteriorly. A black claviform spot is present, lined with powdery yellow in specimens with strong similar filling of the other spots, and filled with the ground color. The hindwing is medium-dark brown-gray with darker gray margin, with dark veins, discal spot, and terminal line. The hindwing fringe is white with a gray base. The head and thorax match the forewing color with a thin to thick black line across the mid-collar. A frontal tubercle is present. The male antenna is biserrate. Euxoa satis is placed in the subgenus Euxoa and is a member of the Euxoa infausta species-group.

Euxoa satis can usually be identified by its summer flight period, powdery brown-black color, black markings with gray or powdery light yellow lining of the spots, and the elliptical orbicular spot. It is similar to Euxoa infausta, a widespread member of the same species-group, but can be differentiated from it by much darker color, lighter filling of the lines, and—when present—the dark in the cell and the extensive light yellow in the spots which are not features of this species. Euxoa satis is likely to be confused with to Euxoa tessellata and Euxoa occidentalis in the Pacific Northwest. Euxoa tessellata is variable, very common, and also flies during the summer. Some of its forms are almost identical to E. satis, but males can usually be told by the presence of a tuft of yellow scales at the base of the forewing that E. satis lacks, and females of E. tessellata have apically truncate anal papillae while those of E. satis are rounded. The orbicular spot of E. tessellata is less symmetrically oval than that of E. satis. Euxoa occidentalis usually flies slightly later in the season than E. satis, although some overlap is likely. It is strikingly close to E. satis in color, differing mainly in the presence of a smaller, rounder, and lighter gray-filled orbicular spot. Some specimens have light orange lining of the reniform spots, a feature lacking in E. satis, and its antemedial line are even with black and gray components.

The type locality of the synonym Euxoa cocklei Smith was described from Kaslo, British Columbia.

This is one of the most ecologically plastic Euxoa species.  It is widely distributed in coniferous forests throughout much of western North America.  In the Pacific Northwest, it is common to abundant in conifer forests of Douglas fir and ponderosa pine at middle elevations and spruce-fir forests at high elevations in the Cascades and Rocky Mountain regions, but is also frequent in juniper woodlands at lower elevations east of the Cascades.  It is particularly abundant during wet years in pine and juniper habitats, declining in the same habitats during drought years.  During wet years, it may expand into the dry sagebrush steppes of central Oregon at low elevations east of the Cascades, becoming temporarily common in this habitat, before contracting and disappearing during drought years.  It also occurs sporadically in the rainforests of the Coast Range, but is relatively rare west of the Cascades.

Euxoa satis is found almost everywhere in the Pacific Northwest south of southern British Columbia except at very high elevations. It is found on both sides of the Coast and Cascade Ranges and is more generally distributed on the west side of the mountains than E. infausta.

This species occurs in southwestern Alberta near to the Northwest. The range extends south to central Colorado, Utah, northern Nevada, and central California.

No information is presently available regarding larval foodplants of this species, but it is probably a soil-surface feeding cutworm that feeds on general herbaceous vegetation based upon related species.

Adults of E. satis are on the wing during the summer, usually from early June to late August. Most of the specimens found for this survey are from July to mid-August. They are nocturnal and come to lights.