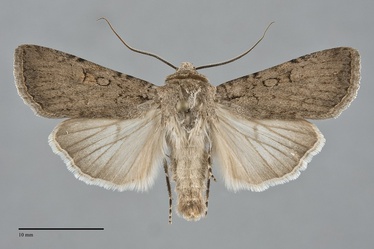 Euxoa choris is a moderately large Euxoa (FW length 16–20 mm) that flies east of the mountains during summer. It has a dark, grayish-tan forewing with a thin, black, basal dash and black-rimmed orbicular and reniform spots. The forewing color is even, slightly darker and grayer on the costa in the subterminal area and in the terminal area and occasionally darker in the cell. A thin black basal dash is present, sometimes reduced to a black spot in individuals with reduced transverse lines. The dark veins are often visible distal to the postmedial line but the moth does not appear streaked. The lines are dark gray to black, varying from almost absent except as spots on the costa to prominent across the forewing. The basal and antemedial lines are partially double, filled with the ground color. The basal line is visible anterior to the basal dash and is interrupted in the cell. The antemedial line is slanted slightly toward the outer margin across the wing, is pulled toward the base on the veins, and often forms a prominent bulge toward the outer margin above the posterior margin. The median line is faint, only present in the darkest specimens. The postmedial line is strongly toothed on the veins, evenly curved lateral to the reniform spot and straight at a 45° angle toward the base below the level of the cell. The subterminal line is tan, usually obsolete but sometimes evident as a pale line in the distal gray shade. Small black triangles forms the terminal line. The fringe is gray-tan. The orbicular and reniform spots are partially outlined in black without a pale lining and are filled with the ground color. The orbicular spot is oval or a long diamond-shape, usually complete but sometimes open anteriorly, often tapering toward the reniform spot. The reniform spot is kidney-shaped, usually outlined in black medially and weak elsewhere, less prominent than the orbicular spot. The claviform spot is weak, a few gray scales near the apex in some specimens. The hindwing is pale grayish tan, weakly shaded with gray-tan toward the outer margin, with slightly darker veins, discal spot, and terminal line. The head and thorax match the forewing, with a thin black transverse line across the mid collar. A frontal tubercle is present. The male antenna is strongly biserrate with long fasciculae. Euxoa choris is a member of the large subgenus Euxoa.

This species can usually be identified despite the variation in prominence of the transverse lines by its summer flight period, relatively large size for the genus, and the combination of even gray-tan color, black basal dash, and limited black markings that includes an oval or diamond-shaped orbicular spot. The postmedial line, when evident, is single rather than double as in many other brown Euxoa species. It is most similar to Euxoa messoria which usually flies slightly later in the year. Poorly marked specimens resemble the uncommon species Euxoa permixta. This species is slightly smaller with relatively shorter forewings, appears gray rather than tan, and has darker hindwings. Its postmedial line is scalloped rather than toothed as in E. choris, and bends sharply near the costal margin rather than curving smoothly around the reniform spot.

This species is widely distributed in dry forest and rangeland habitats throughout much of western North America.  In the Pacific Northwest, it is most common in open sagebrush steppe and near the transition from forest to steppe. It is also moderately common in open ponderosa pine forests and juniper woodlands at middle elevations east of the Cascades. It is often collected on dry rocky ridges in forests.

Euxoa choris is found in dry habitats east of the Coast and Cascade Mountains as far north as southern British Columbia.

The range of this species includes a large part of western North America. The northern limit is south-central Yukon Territory, extending to central Alberta further east. It is found south to New Mexico near the eastern foothills of the Rocky Mountains. It is widespread further west, reaching northern Arizona and the Transverse Ranges of southern California.

Euxoa choris flies during the summer, with records in our area from mid-June through August. It is nocturnal and comes to lights.