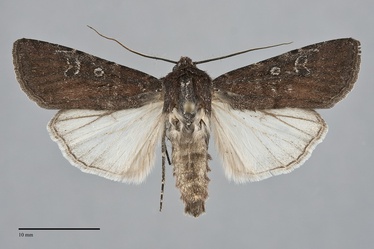 Euxoa intermontana is a moderately large Euxoa (FW length 18–20 mm) that flies east of the summit of the Cascades during late summer and fall. It has uniform, dark maroon forewings marked with pale-lined orbicular and reniform spots. Hindwings vary between the sexes; they are white in males and white with a well-defined gray marginal band in females. The forewing color is nearly uniform, slightly darker and grayer in the terminal area and sprinkled with pale scales near the base and along the costa. The basal, antemedial, and postmedial lines are usually faint or absent except as double gray spots and pale areas near the costa. When evident, the antemedial line is double, gray, filled with powdery luteous scales, slightly irregular, and angled slightly toward the outer margin. The median line is absent or gray, evident on the costa and below the reniform spot. The postmedial line is toothed on the veins, drawn toward the base on the costa and weakly excurved at an oblique angle toward the base across the rest of the forewing. The orbicular and reniform spots are outlined by black with a lining of pale yellow scales and filled with the ground color. The orbicular spot is small and round, often very sharply-defined. The reniform spot is kidney-shaped, indistinct and filled with gray posteriorly. The claviform spot is absent or evident as a few pale scales. The hindwing and fringe are pure white with a gray veins, discal spot, and thin terminal line in males; similar but whitish gray with a well-defined gray band on the outer third in females. The head and thorax match the forewing color or are darker black-brown. The male antenna is weakly bipectinate. Euxoa intermontana is one of four species in the subgenus Palaeoeuxoa. This subgenus is characterized by the combination of spoon-shaped tips of the saccular extensions and harpes of equal or greater length in males.

This species can usually be recognized by its dark red-brown forewing color, pale-yellow-lined spots, white hindwings in males, and peripherally banded white hindwings in females. It is similar to other species in the same subgenus, especially Euxoa mimallonis and Euxoa biformata.  Euxoa mimallonis has similar male and female hindwings, but has bright red-brown forewings instead of maroon. Euxoa biformata has a similar forewing but has darker hindwings; the hindwings of males resemble those of females of E. intermontana, and those of females are darker at the base. Euxoa ustulata, a rare species that is similar to E. intermontana in size and color, has dark gray hindwings and lacks the pale rims in the forewing spots.

The larva of this species is unknown.

This species occurs in a variety of habitats ranging from moist forests to open sage steppe. It is particularly abundant in dry open forests of ponderosa pine and lodgepole pine at middle elevations along the east slope of the Cascades, but is also common in spruce-fir forests at high elevations along the summit of the Cascades, and in dry juniper woodlands at lower elevations east of the Cascades.  It is usually uncommon or rare in open sagebrush steppe at low elevations, particularly during drought years, but may be frequent in this habitat during wet years. This species is the most common member of the subgenus Palaeoeuxoa in the Northwest.

Euxoa intermontana is found in the dry interiors of Washington and Oregon as well as in southern Idaho and western Montana.

The range of this species extends south from our region. The limits of the range given by Lafontaine (1987) are western Colorado, northern New Mexico, northern Arizona, and eastern California.

The adults are single brooded and have been found from early July through the fall in our region. Most records are from late August and early September, slightly earlier than the latest-emerging fall Euxoa species from open steppe habitats.