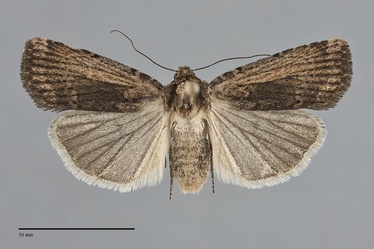 Abagrotis nanalis is our smallest Abagrotis species (FW length 11 - 13 mm) and has a distinctive streaked pattern on a gray and tan forewing. It flies in sage steppe in late summer and fall. The forewing is grayish tan, lightest in the terminal area, with gray on the veins, near the trailing margin, preceding the subterminal line, and at the fringe. The transverse lines are faintly marked at the costa, and the lighter tan filling of the postmedial line is evident in most specimens. The spots are tan with gray filling, but are absent or barely evident in most individuals. The hindwing is light tan-gray with dark gray suffusion toward the margin, dark veins, and a light fringe. The head, collar, and tegulae are gray, while the central thorax is grayish tan.

This species can be identified by its small size and streaky forewing pattern. It is not likely to be confused with any Abagrotis in our area. Worn specimens could potentially be confused with Proxenus mindara which also flies in sage steppe, but this species is much less streaky in pattern and has light hindwings without dark veins.

This species occurs on arid rangelands and woodlands.  In the Pacific Northwest, it is common in juniper woodlands and on dry, open sagebrush steppe at middle to low elevations east of the Cascades.  Numbers of this species were greatly reduced on sagebrush-juniper rangeland that was burned over in a wildfire during the previous two years, compared to adjacent non-burned habitat.  This species is intolerant of fire disturbance due to the loss of the foodplant.

Abagrotis nanalis occurs in the drier portion of the Pacific Northwest, including the Coast Range shadow near Lillooet, British Columbia, in much of eastern Washington and Oregon, southern Idaho, and western Montana.

The range of this species outside of our area extends east to the western portion of the Great Plains and south to northern New Mexico, southern Utah, central Nevada, and east-central California. It does not occur near the Pacific Coast.

Adults are on the wing in late summer. Most records from our region are from mid-August through September.