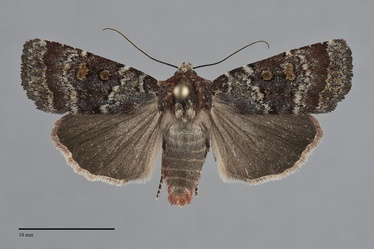 Abagrotis pulchrata is a very attractive species from forests in the western part of our area. It was called the "gem" of Abagrotis by Lafontaine (1998) because of its beauty and rarity. This medium-sized species (FW length 14 - 17 mm) appears to be nearly rainbow-colored because of the pattern of light gray and dark orange markings against a dark purplish-red ground color. The ground color of the forewing is suffused with dark to light gray and orange scales producing a mottled greenish hue to the basal and terminal forewing, a darker median area, and a wine red area between the postmedial and subterminal lines. The dark gray basal, antemedial, and postmedial lines are filled with light gray. The antemedial line is slightly uneven and is oriented obliquely from near the base at the costa toward the anal angle posteriorly. The postmedial line has a dentate inner component. The subterminal line is even and pale. The small orbicular and reniform spots are black with orange filling. The hindwing is dark gray with a pale reddish fringe. The head and thorax match the dark red portions of the forewing. The male antenna is filiform.

This multicolored "gem" cannot be confused with any other species in our western forests.

This species is found in moist forests.  It is usually very rare and sporadic except in western Oregon, where it is locally common to abundant in oak woodlands and mixed hardwood forests at low elevations.  It is also moderately common in mixed hardwood-conifer forests at middle elevations in the Coast Range and along the west slope of the Cascades.

Abagrotis pulchrata is found in the western part of the Pacific Northwest south of Vancouver Island, British Columbia, both in the Coast Range and along the west slope of the Cascade Range. It is less commonly found in Washington than in Oregon.

This species is known from a few localities in western California as far south as San Francisco Bay.

This species is known to feed on Rubus spp. in the Rosaceae, and may be a foodplant specialist.

Adults are single brooded and fly in late summer and fall. They have been found from mid-July through September in our region. It is a nocturnal species that comes to lights.