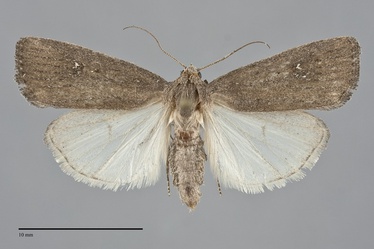 Proxenus mindara is a small (FW length 11 - 14 mm) medium dark brownish-gray moth with forewing markings nearly limited to pale scales in the upper and lower portion of the reniform spot, a punctate black orbicular spot, and dark veins on the distal third of the wing. The postmedial line is very faintly evident on the veins in some individuals. The hindwing is light gray. The head and thorax match the forewing. The male antenna is filiform.

This species is most similar to Proxenus mendosa, a similar gray moth that occurs in wet habitats with willows further to the north, but these species do not occur together. Proxenus mendosa lacks the black orbicular dot of P. mindara. Proxenus miranda, a more widespread species that flies in forests, is similar in general pattern but is much darker blackish gray. Worn specimens of Abagrotis nanalis have a similar wing shape and are gray; however, they can usually be told from P. mindara by their brown and gray wing color and stronger forewing pattern.

This species is usually found in dry, open grasslands and agricultural areas at low elevations east of the Cascades, although it has been found in open ponderosa pine forests at middle elevations in the Rocky Mountain region.

Proxenus mindara is found in the dry interior of the Northwest, including southern British Columbia, Washington's Columbia Basin, southeastern Oregon, and the Snake River Plain of southern Idaho.

The range of this species extends south to southern California from the Pacific Northwest.

No information is presently available regarding larval foodplants of this species, but it probably feeds on herbaceous plants like related species.

Proxenus mindara has a long flight season and is on the wing from early May through September in our region suggesting the presence of more than on brood. It is most commonly collected during July and early August. It is nocturnal and comes to lights.