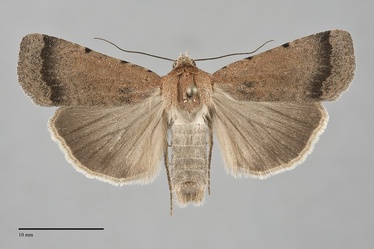 This extremely rarely collected species is a relatively large Abagrotis (FW length 16 - 18 mm) that is restricted to eastern Oregon in the Pacific Northwest and flies in late summer and early fall. It has olive-brown to orange-brown forewings with black shading medial to the subterminal line. The forewings are smooth with a slight sheen and appear slightly dusty due to scattered black scales. The terminal area is grayer than the rest of the wing. The pale lines and spots are very faint except for dark gray spots on the costa at the antemedial and postmedial lines and a dark gray shade across the distal wing at the subterminal line. The hindwing is dark brown-gray with dark veins and a lighter two-toned fringe. The head and thorax match the forewing ground color, with slight transverse barring on the distal collar. The male antenna is filiform.

This species can be identified by its smooth olive to red-brown forewing with dark transverse band across the distal wing. It could potentially be confused with heavily marked forms of Abagrotis variata, but this form has more extensive dark markings than those of A. petalama and has a broader forewing shape.

This species is very rare.  The Oregon population mostly occurs in dry rocky canyonlands at low elevations, but has also been found on a high-elevation dry open ridgetop overlooking Hells Canyon on the Snake River.

The only other known locality where this species has been collected is the type locality near Carson City in western Nevada.

No information is presently available regarding larval foodplants of this species, but it probably feeds on hardwood shrubs based on closely related species. Mountain mahogany (Cercocarpus spp.) in the Rosaceae is a possible foodplant based on the occurrence of this plant at the Oregon localities where the moth is most common.

This species has been found from mid-June to mid-September in our region. It is nocturnal and comes to lights.