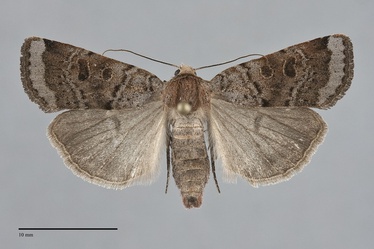 Abagrotis turbulenta is a rarely collected, medium-sized Abagrotis species (FW length 15 - 16 mm) that occurs in south-western British Columbia and north-central Washington in our area. It has gray-tan forewings with bluish clay basal and terminal areas, smooth double lines, and dark-filled spots. The median area is traversed by a gray median line and the area medial to the subterminal line is darker gray than the rest of the forewing. The basal, antemedial, and postmedial lines are dark gray, double, even, and filled with the ground color. The antemedial line is nearly straight and has an oblique course from anteromedial to posterolateral. The postmedial line is gently excurved toward the margin. The orbicular and reniform spots are similar, darker than the ground color on the outside and paler on the inside with uniform dark brown filling. The claviform spot is absent. The hindwing is medium dark to dark gray with barely evident discal spot and a slightly lighter two-toned fringe. The head and thorax are even gray-brown like the forewing ground color. The male antenna is filiform.

This species can be identified in our area by the combination of blue gray basal and terminal areas, smooth double lines, and dark-filled spots. Some gray-brown forms of Abagrotis placida and Abagrotis scopeops resemble A. turbulenta but lack this precise combination of features. The populations of this species from the southern Rocky Mountain region are more orange-brown and often lack the blue-gray areas on the ends of the forewing.

This species is most similar to Abagrotis scopeops, a common and widespread species in our area.

This species is primarily found in dry, open juniper forests.  It appears to be very rare and local in the Pacific Northwest.

Abagrotis turbulenta is rare and local in our region. It occurs in two areas: the Fraser River canyon between Lytton and Lilloet, British Columbia and in north-central Washington near the confluence of the Okanogan and Columbia Rivers.

The center of distribution of this species is in the Four Corners states and adjacent eastern Nevada.

No information is presently available regarding larval foodplants of this species, but it might feed on junipers based on its distribution and association with this plant.

Adults have been found from mid-July to mid-September in the Pacific Northwest.