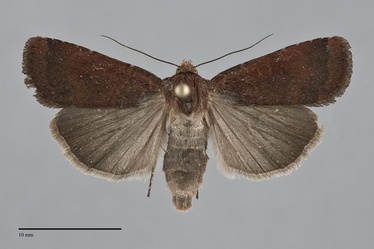 Abagrotis brunneipennis is a rarely collected, smooth red-brown, medium-sized Abagrotis (FW length 14 - 16 mm) that occurs in forests. Its forewing sometimes, but not always, has blackish brown areas between the basal and antemedial lines and the postmedial and subterminal lines. Almost all Pacific Northwest specimens of this species are a rich dark orange-brown color, darkest at the costal margin near the subterminal line and lightest at the adjacent apex. When present, the dark areas between the lines produce a banded appearance to the forewing that is unique in the genus. The transverse lines and spots are barely evident. The median line and claviform spot are absent. The hindwing is dark gray with a two-toned dark and light gray fringe. The head and thorax match the forewing ground color. The male antenna is filiform.

This species can usually be identified by its red-brown color and slight glossy sheen. The most similar species is Abagrotis cupida, but its lines are more distinct and it has a dark spot at the costal origin of the subterminal line that A. brunneipennis lacks.

The larva is described in Lafontaine (1998). It has pale brown spiracles and a continuous pattern of subdorsal dark spots.

This species is found in forests.  It is usually rare and sporadic in the Pacific Northwest, and occurs in spruce-fir forests and mixed hardwood-conifer forests at middle to high elevations in the Cascades and Rocky Mountain region. The habitat is open dry transition zone forest in the northern Cascades and Fraser River Canyon.

Abagrotis brunneipennis occurs in a narrow east-west distribution near the border with Canada in northern Washington, nearly spanning the breadth of the state. It has also been found on the Kitsap Peninsula in Washington and in the High Cascades Province in western Oregon. In British Columbia it occurs in the Fraser Canyon between Lillooet and Lytton.

This species is interesting because records of its occurrence are widely dispersed in the West. Outside the Pacific Northwest it has been found once in Utah, Colorado, South Dakota, North Dakota, and Manitoba and twice in Saskatchewan. It is more commonly found further east, including in the Midwest, southern Canada, New England, and in the Appalachian Mountains to North Carolina.

This species appears to be a foodplant specialist feeding on huckleberries (Vaccinium spp.) in the Ericaceae.

Adults fly in late summer in our region. Records are from the months of July and August. It is nocturnal and comes to lights.