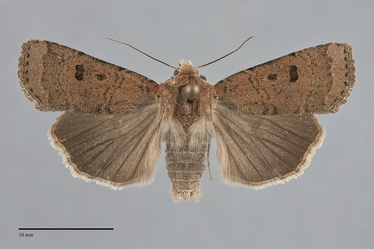 Abagrotis baueri is a seldom-collected, medium-sized Abagrotis (FW length 15–16 mm) that occurs in dry forests in the western part of our region. It has orange-brown—less commonly dark brown—forewings sprinkled with black scales and dark-filled orbicular and reniform spots. Most specimens of this species have a similar rich orange-brown color, but the degree and pattern of black suffusion varies considerably between individuals. Some are nearly even orange-brown while others are nearly black with the lighter ground color showing as filling of the lines and spot. The lines are dark gray, double, and filled with the ground color. The antemedial line is slightly irregular and is angled slightly toward the anal angle from the costa. The postmedial line is smoother, with weak scalloping of its medial component. It is nearly perpendicular to costa, with slight bend basad at the lower reniform spot. The light subterminal line is well defined, slightly irregular. A gray shade precedes it in light specimens, darkest near the costa. A series of gray spots between the veins forms the terminal line. The orbicular and reniform spots are pale with uniform dark gray-brown filling, even in light specimens. The orbicular spot is round or slightly oval. The reniform spot is medium sized, slightly figure eight shaped. The claviform spot is absent. The hindwing is medium brown gray with darker margin, discal spot, and veins. The fringe is two toned with gray base and whitish margin. The head and thorax match the forewing. The male antenna is filiform.

This species is similar to a number of Abagrotis species, as well as Parabagrotis cupidissima. It is distinguished most easily from Parabagrotis because they have orbicular spots that open toward the costa, complete in Abagrotis. Abagrotis baueri can be distinguished from other Abagrotis species by its powdery orange-brown color and dark-filled spots. Heavily suffused specimens are unlikely to be confused with other species. Abagrotis orbis, typically light brown with a sprinkling of dark scales, is most similar to A. baueri. It is larger, with its forewing usually greater than 16 mm, and the dark reniform filling is in the lower half of the spot, not filling it completely, as in A. baueri. Some Abagrotis forbesi, a variable species, also resemble A. baueri. Its orbicular spot is filled with the ground color, not dark, and the rest of the forewing usually lacks scattered black scales. Some Abagrotis trigona, particularly females, are also similar to A. baueri and can have dark-filled spots. Compared to A. baueri, A. trigona has a wider forewing that is smoother with fewer black scales, a wider less bar-shaped reniform spot, and smoother forewing lines that usually lack black dots along the lateral postmedial line. Some male Abagrotis can be identified without dissection by removing the scales from the distal valves with a fine brush and examining them under magnification. The distal valves of A. baueri are expanded and flattened like small paddles, unlike the thin tapering valves of A. forbesi, and smaller than the foot-shaped processes of A. orbis.

This species occurs in drier forests.  It is seldom collected but is sometimes common in savanna, woodlands, and mixed hardwood forest with oaks at low elevations west of the Cascades in Oregon.  It also occurs in mixed hardwood-conifer forests with golden chinquapin at middle elevations along the west slope of the Cascades and Siskiyou Mountains. It occurs sparingly in open forest farther north, including in the absence of oak.

Abagrotis baueri occurs in the western part of the Pacific Northwest as far north as Vancouver Island and the lower Fraser Valley in British Columbia, and Whatcom County, Washington. It is most common in western Oregon. Its range extends east through the Columbia Gorge to Klickitat County, Washington. It has not been found on the east slope of the Cascades elsewhere but could potentially occur in other areas with oaks, such as in Klamath and Wasco counties, Oregon.

This species is limited to the West Coast of North America. It is found as far south as Los Angeles, California and as far east as the Sierra Nevada foothills.

Abagrotis baueri is probably a foodplant specialist on Fagaceae based upon the habitat associations, although it must use other plants in the few areas where it occurs in the absence of oak. Oregon white oak (Quercus garryana) and golden chinquapin (Castanopsis chrysophylla) may be the primary larval foodplants.

Adults of this species have a long flight period from late June to early October. They are nocturnal and come to lights.