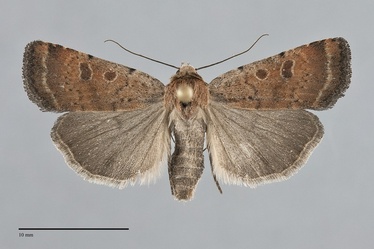 Abagrotis dodi is an orange-brown, relatively small Abagrotis (FW length 13 - 15 mm) that is usually found at middle to high elevations. It has dark forewing spots and a dark terminal area. The forewing color varies from light to dark orange-brown. The forewing becomes gradually darker and more grayish toward the outer margin, although a small spot of the ground color is present at the apex. The basal, antemedial, and postmedial lines are gray, double, and filled with a lighter shade of the ground color. They are faint, except at the costa, where they form dark spots. The postmedial line is weakly scalloped. A series of small spots or thin lines are present on the veins lateral to the line in some individuals. A dark median line is evident across the forewing in most specimens. The subterminal line is lighter and slightly yellowish, smooth and complete across the forewing, forming a prominent, pale mark against the dark background. The orbicular and reniform spots are pale, fairly small, and filled with a dark shade of the ground color. The claviform spot is absent. The hindwing is medium-dark brownish gray, gradually darker and grayer toward the margin, with a faint discal spot and a lighter two-toned fringe. The head and thorax match the forewing ground color. The male antenna is filiform.

Abagrotis dodi can be recognized by its small size, orange-brown color with dark-filled spots and pale yellowish terminal line. It is unlikely to be confused with other species in its middle to high-elevation habitat. It resembles Abagrotis hermina in size and pattern. This species is found at lower elevations. This species is usually duller gray-brown. A few specimens are reddish brown. The terminal area of this species is lighter gray than the rest of the wing, unlike that of A. dodi which is darker than the ground color.

This species is widely distributed in dry, open conifer forests, but is most common on dry ridges at moderate elevation.  In the Pacific Northwest, it is usually sporadic in ponderosa pine forests at middle elevations, although it can be common in the proper habitat. This species is less rare in the Pacific Northwest than suggested by Lafontaine (1998).

This species is most commonly collected along the east slope of the Cascade Range in Washington in our region. It has been found in the Warner and Blue Mountains of eastern Oregon. It also occurs in southern Idaho and in the Purcell Mountains in southeastern British Columbia.

This species has a patchy distribution in western North America. Outside of the Northwest it has been found in southwestern Yukon Territory, in the Rocky Mountains of southern Alberta as well as in Colorado and adjacent states, and in central Nevada.

Adults fly in summer and early fall, with records from mid-July to early September in our region. It is nocturnal and comes to lights.