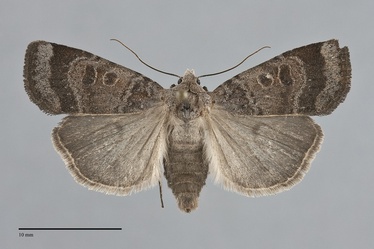 Abagrotis placida is small to medium-sized Abagrotis (FW length 14–16 mm) that occurs in forests throughout the Pacific Northwest. Its forewing has a wide range of colors, ranging from light to dark red-brown to gray-brown with a slight olive tint, and is marked with prominent lines and large spots. The forewing color is most often dark red-brown or olive gray-brown, but orange-brown and dark brown forms occur. The forewing is darkest median to the subterminal area and the terminal area is lighter and grayer than the rest of the forewing. The basal, antemedial, and postmedial lines are a dark shade of the ground color, double, and filled with similar light gray as the terminal area, less commonly slightly yellowish scales. All are usually evident in their entirety and are only slightly darker at the costa than elsewhere. The antemedial line is very smooth, nearly straight, and oriented obliquely from anteromedial to posterolateral across the forewing. The postmedial line is also very smooth, including the medial component which is only rarely scalloped. It is drawn toward the forewing base at the costa, is gently excurved toward the margin around the reniform spot, and then slightly obliqued toward the base through the fold. The median line is dark and is fairly prominent in almost all specimens. The subterminal line is slightly irregular, pale but fairly weak, evident mostly as the transition from dark to lighter gray. The orbicular and reniform spots are similar, light with filling that is slightly darker than the surrounding median area. The orbicular spot is fairly large, often round to broadly ovoid, and the reniform is weakly kidney or figure-eight shaped. The claviform spot is absent. The hindwing is medium dark brownish gray, becoming gradually darker gray to the margin, with a faint darker discal spot and two-toned gray and whitish fringe. The head and thorax match the forewing color. The male antenna is filiform.

This species resembles many other Abagrotis species. However, it can usually be identified by the combination of dark red-brown or dark olive gray-brown color, a complete pattern of lines including a median line, and relatively large pale spots that are filled with slightly darker color than the ground. Brownish specimens of A. placida are easily confused with Abagrotis reedi, another common and widespread species. Most A. reedi are browner in color with less gray in the terminal area, have filling of the lines that is a lighter shade of the brown ground color rather than grayish as in A. placida, and slightly smaller forewing spots. Males can be distinguished by brushing the scales from the tip of the abdomen. The distal valves of A. reedi are very thin distal to the sacculus while those of A. placida taper gradually and have a triangular process along the inner margin distal to the sacculus that is lacking in all other species. Small specimens of A. placida can be confused with Abagrotis hermina. This species has less prominent lines, usually lacks the median line, and has a pale mottled hindwing. Males of A. hermina lack the triangular process on the medial valve. At higher elevations small reddish A. placida could be confused with Abagrotis dodi. These species can usually be distinguished without examination of the genitalia because A. dodi is orange-brown and has a dark terminal area with a prominent light subterminal line unlike the gray terminal area and inconspicuous subterminal line of A. placida. Some light gray-brown specimens of A. placida could be confused with Abagrotis turbulenta, a rarely collected species with a restricted range in south-western British Columbia and northern Washington. This species has blue-gray at the wing base as well as in the terminal area and more sharply defined spots than those of A. placida. Abagrotis dickeli, a rare species that has only been found in south-central British Columbia in our area, is superficially indistinguishable from red-brown forms of A. placida but differs in the structure of the genitalia of both sexes and can be distinguished by mitochondrial DNA sequencing, an advanced technique that is available at only a few universities. The genitalic differences between the males are described under A. dickeli.

Abagrotis placida is found in forests throughout most of the Pacific Northwest as far north as central British Columbia. It does not occur in steppe regions of the Columbia Basin, south-eastern Oregon, or the Snake River Plain of southern Idaho.

This species is widely distributed in boreal and montane forests in North America. The range extends across the Continent from central Alaska, Yukon Territory, and Northwest Territory to the island of Newfoundland and northern New England.  It is most commonly collected in the West from central British Columbia and Saskatchewan south to southern New Mexico and the Transverse Ranges in southwestern California.  However, it is absent from the dry interior of the Great Basin and the deserts of southern California and most of Arizona.

No information is presently available regarding larval foodplants of this species, but it probably feeds on hardwoods based on related species.

Adults have been collected from early July through September in the Pacific Northwest but are most common in July and August, slightly earlier in the season than the peak flight periods of most other Abagrotis in our region. They are nocturnal and come to lights.