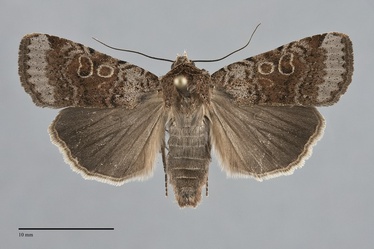 Abagrotis scopeops is a common, distinctive, medium-sized Abagrotis (FW length 15 - 17 mm) that is dark brown with a lighter gray-brown forewing base and filling of the lines, light-rimmed spots, and blue-gray terminal area. Most of the forewing is slightly mottled dark brown, darkest at the costa medial to the subterminal line. The base medial to the antemedial line is slightly lighter gray-tan to brown-gray. This color extends to the postmedial line along the costa in some specimens. The terminal area is uniformly light blue-gray. The basal, antemedial, and postmedial lines are dark brown, double, and filled with lighter brown to gray-brown. The antemedial line is slightly irregular and is oblique across the wing from anteromedial to posterolateral. The postmedial line is slightly scalloped. A series of light spots is present lateral to this line in some individuals. The median line is very faint. The subterminal line is pale and gray but not conspicuous against the blue-gray terminal area. The orbicular and reniform spots are similar pale brown with filling of the brown ground color. The orbicular spot is moderately large and round. The reniform spot is also fairly large, usually ovoid or weakly figure-eight shaped. The claviform spot is absent.

This species can usually be recognized by the combination of brown forewing, blue-gray terminal area, and large light-rimmed spots that are filled with the ground color. It could potentially be confused with the rarely collected Abagrotis turbulenta which occurs in south-western British Columbia and north-central Washington in our area. This species is lighter gray-brown than A. scopeops and has blue-gray on the base of the wing as well as in the terminal area.

Abagrotis scopeops is widely distributed in the Pacific Northwest as far north as south-central British Columbia and east to western Montana and southeastern Idaho. It is most common in the Cascade Mountains and in the interior to the east, but occurs in drier areas west of the Cascades in northwestern Washington and through much of eastern Oregon.

This species is most commonly found near the Pacific Coast states where it ranges to south-western California near the border with Mexico. Only scattered records exist for the Intermountain Region. It does not appear to be found in the Rocky Mountains south of Idaho.

No information is presently available regarding larval foodplants of this species, but it probably feeds on hardwoods based on related species.

Adults have been collected from late June through September in the Northwest. They are nocturnal and come to light traps.