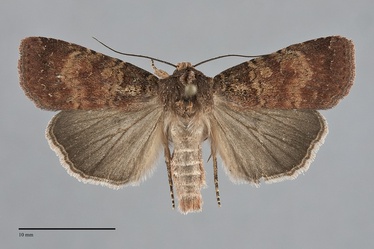 Abagrotis apposita is a mottled brick-red, medium-sized moth (FW length 14 -  17 mm) that flies in forests in late summer. All elements of the forewing pattern are brick red. The color varies from nearly even across the wing to darker in the basal area, along the costa, and distal to the postmedial line. the lightest area in the darkest specimens is along the postmedial line. The central median area is dark due to the diffuse median line. The basal, antemedial, and postmedial lines are dark, double, with filling that is lighter than the rest of the wing. All are fairly even. The medial component of the postmedial line is weakly scalloped between the veins. The subterminal line is a series of pale yellowish spots. The orbicular and reniform spots are similar, light with filling of the ground color or slightly lighter scales. A dark spot is present in the lower reniform spot. The claviform spot is absent. The hindwing is dark brownish gray, slightly darker toward the margin, with faintly darker gray discal spot and veins, and a lighter two-toned fringe. The head and thorax are even and are slightly darker than the wings. The male antenna is filiform.

This species can be distinguished from all other Abagrotis species by its mottled brick red color. It could be mistaken for one of the red-brown Euxoa species, but these species are less brick red and have some elements that are a different color than the rest of the wing unlike A. apposita. Diarsia rosaria, a common widespread moth, has a similar wing color but differs from A. apposita in having less conspicuous forewing lines and some ochre scales in the reniform.

The type locality of Agrotis apposita Grote is Vancouver Island.

Abagrotis apposita is found in forests in the western Pacific Northwest from the vicinity of Lillooet, British Columbia southward. The range extends east across southern British Columbia and northern Washington to the Idaho Panhandle and extreme western Montana. It is also found east of the Cascades in the Blue Mountains of Oregon and south-eastern Washington.

The range of A. apposita extends south to south-central California.

This species is known to be a generalist feeding on many kinds of hardwoods including serviceberry (Amelanchier spp.)  in the Rosaceae, madrone (Arbutus menziesii) in the Ericaceae, and snowbrush (Ceanothus spp.) in the Rhamnaceae.

This species flies in the summer months, with most records in our region from early July to late August. It is nocturnal and comes to lights.