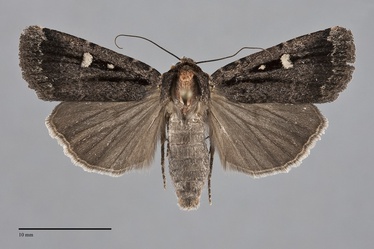 Abagrotis glenni is a medium-sized (FW length 13 - 17 mm), dark brown-gray moth that flies near junipers during the late summer. It has a gray thorax with a central brown area and a forewing with light cream-colored spots and black horizontal streaks at the base and in the cell. The forewing ground color is slightly variable, usually dark gray-brown, but darker blackish gray or with a red-brown suffusion in some areas.  The wing is slightly darker near the subterminal line. The terminal area is usually lighter gray, especially near the apex, but is luteous with dark veins in some individuals. A black basal dash is fused to the black-filled claviform spot to produce a long basal streak. The cell is filled with black outside of the spots; this black continues as a streak toward the outer margin from the reniform spot in most specimens. The transverse lines are only evident as double gray marks at the costa. The orbicular and reniform spots are filled with light yellow scales. The orbicular spot is absent or small, while the reniform spot is wide and ovoid in shape. The hindwing is dark gray with a two-toned gray and white fringe. The head, collar, and patagiae are gray, while the central thorax is tan to light reddish brown. The male antenna is filiform.

This species is most similar to Abagrotis striata and Abagrotis mirabilis. It is most likely to be confused with the latter species because it is widespread in our area east of the Cascades.  It is usually lighter colored so that the black markings dominate the wing pattern. The ground color of A. mirabilis is dark gray which obscures any black marks leaving the pale spots as the dominant marking in this species.  Abagrotis striata is only found in extreme southeastern Idaho in our region, but flies with A. glenni there. It has a terminal area that is streaked with black, and the distinction between in color between the subterminal and terminal areas is much less than in A. glenni.  In addition, most specimens of A. striata are redder than those of A. glenni.

This species is geographically variable. Specimens from most of our area are gray, but those from Anacortes, Washington and southern Idaho are more red-brown in ground color similar to populations in the southern Rocky Mountains in Colorado and Utah. Those from British Columbia have dark gray ground color.

Larva is smooth, pink-brown with white dorsal spots and black sub-dorsal and lateral dashes.  It is illustrated by Miller and Hammond (2003).

This species is found in dry woodlands.  In the Pacific Northwest, it is common to abundant in juniper woodlands at middle elevations east of the Cascades, but is usually rare in mixed conifer forests at higher elevations in the Cascades.  Numbers of this species were greatly reduced on sagebrush-juniper rangeland that was burned over in a wildfire during the previous two years compared to adjacent unburned habitat, indicating that it is intolerant of fire disturbance due to the loss of the foodplant.

Abagrotis glenni is predominantly found east of the Cascade Mountains in the Pacific Northwest. It occurs in the Coast Range rain shadow along the Fraser Canyon as far north as Lillooet in British Columbia. The distribution is spotty in Washington, with a few scattered localities along the east slope of the Cascades. An isolated population is found along the Salish Sea in juniper forest on serpentine substrate in Anacortes, Skagit County, Washington. Abagrotis glenni is widespread in eastern Oregon where Juniperus occidentalis grows commonly. It also occurs in southern Idaho near the border with Utah.

This species is found widely in the Rocky Mountain states from western Montana to central New Mexico, in the Southwest in Utah, eastern Nevada, and north-eastern Arizona, and in eastern and southwestern California.

This species is a foodplant specialist feeding on conifers of the family Cupressaceae.  In the Pacific Northwest, the primary larval foodplant is western juniper (Juniperus occidentalis), but it may also feed on cedars at higher elevations in the Cascades. The likely foodplant in eastern Washington is Juniperus communis, and Juniperus maritima is a dominant tree where this species occurs in Anacortes, Washington.

This species flies in late summer and early fall. Records in our region are from early July through September with most specimens having been collected in August. It is nocturnal and comes to lights.