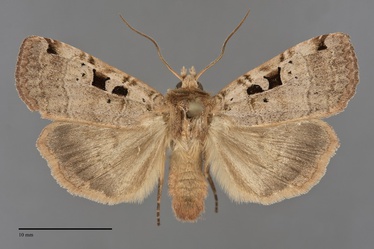 Xestia normanianus is a medium-sized noctuid (FW length 15–20 mm) with relatively stubby reddish tan or light gray forewing and contrasting black markings: filling of the cell outside of the relatively large spots and a bar on the costa near the subterminal line. This species is limited to north-eastern British Columbia in our region. The ground color is slightly mottled dull grayish red-brown to tan, with nearly continues variation between these extremes. The basal, antemedial, and postmedial lines are darker, double filled with the ground color, and undulating without scalloping or strong curves. The median shade is darker than the ground but similar otherwise, evident only on the costa in some specimens and reaching the trailing margin in others. The postmedial line is slightly uneven, pale but preceded on the medial side by a dark shade and a black irregular wedge on the costa. The forewing fringe is similar to the ground color but usually somewhat reddish. The orbicular and reniform spots are outlined partially in black and are filled with the ground color, the orbicular spot is unevenly triangular with open base directed anterior and the reniform spot is weakly kidney shaped with absent posterior margin; both spots are conspicuous due to black filling of the cell between the antemedial line and the medial reniform spot. The claviform spot is variable, present as a black spot or line near the expected apex of the spot or absent. The hindwing is fuscous with a copper sheen. The veins, discal spot, and terminal line are slightly darker gray, generally inconspicuous. The hindwing fringe is lighter, usually whitish at the edge with a reddish base. The head and thorax match the forewing ground color. The male antenna is filiform with ventral innumerable short cilia.

This species can usually be identified by the combination of stubby forewing shape, tan or dull tan ground color, and black in the cell outside of the orbicular and reniform spots and bar preceding the subterminal line on the costa. There are few similar moths in its limited Pacific Northwest range. Xestia smithii is closely similar in most features but lacks black in the cell. Coenophila opacifrons occurs in the range of X. normanianus andis similar in that it has a dark cell. Males are easily distinguished by the wide antenna of C. opacifrons. In general, the forewing of X. normanianus is more evenly colored, either brownish or gray, the black filling of the cell is prominent, and the spots are very prominent due to the adjacent black color and their partial black outlines. Coenophila opacifrons tends to be light gray with a slight reddish tint, the dark in the cell is thinner and lighter gray, and the spots do not appear as prominent as in X. normanianus.

The habitat of X. normanianus is not well known in our region, but it should be sought at low elevations in British Columbia east of the Continental Divide. Farther east it occurs in a variety of habitats.

Xestia normanianus has only been photographed once in the Pacific Northwest. The photo was taken by Libby Avis in the Peace River district of north-eastern British Columbia. This moth is likely to be more widespread in this part of the province, a region that is collected poorly for moths but harbors many species that reach their northwestern range limit there.

This species is fairly widespread in eastern North America from the St. Lawrence Seaway to Kentucky and North Carolina. It ranges west to Alberta, becoming increasingly restricted to the northern Great Plains region west of the Great Lakes.

This species is a fairly general feeder on broad-leaved woody shrubs and small trees. Lafontaine (1998) lists a number of hosts in the plant families Ericaceae, Rosaceae, and Myricaceae.

Adults fly during the summer and early fall, beginning in early July in the East.