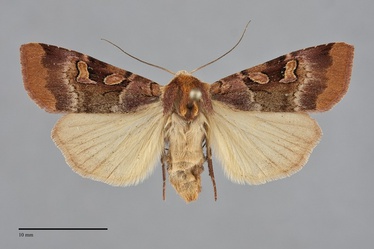 Xestia oblata is a very common, multicolored, medium-sized noctuid moth (FW length 16 - 18 mm) that is found in forests throughout our region during the summer. The forewing is various shades of lilac and wine-red, darkest in the cell and adjacent anterior median area, with orange terminal and basal areas. The lines are double and filled with light rose to violet, with strong components bordering the median area and the other component barely visible except in darkly marked specimens. The subterminal line is evident as the transition between red and orange near the margin. The orbicular and reniform spots are similar with black outer and orange inner lines and rose filling. The orbicular spot is oval to elongate in shape and is open to the costa. The lower inner reniform spot is often extended toward the forewing base. The hindwing is light yellow with rose pink toward the margin, sometimes with a light gray suffusion and submarginal shade but usually lacking dark spot and veins. The head and collar are light yellow with a dark line at the tip of the collar. The rest of the thorax matches the red areas of the forewing. The male antenna is weakly biserrate.

This species is unmistakable due to its colorful red and orange forewing and light yellow hindwing, head, and collar.

Xestia is a large and diverse genus found throughout temperate, alpine, and arctic portions of the Northern Hemisphere. The genus is subdivided into three subgenera, Xestia, Megasema, and Pachnobia, by Lafontaine (1998). The genus is defined by a thumb-like ventral extension called the pollex which arises from the base of the clasper of the male valve. Xestia oblata is a member of the subgenus Xestia.

This species is widely distributed across Canada and throughout the mountains of western North America in moist hardwood and conifer forests.  In the Pacific Northwest, it is moderately common in coastal rainforests, oak woodlands, mixed hardwood forests, and mixed hardwood-conifer forests at low to middle elevations west of the Cascades.  It is also common in spruce-fir forests at high elevations along the summit of the Cascades, in ponderosa pine forests at middle elevations east of the Cascades, and in quaking aspen forests of the Rocky Mountain region.  A disjunct population occurs in quaking aspen forests at high elevations along the summit of the Steens Mountains in southeastern Oregon.

Xestia oblata is common in forests throughout the Northwest. It does not occur in the dry steppe, but is found in higher mountains in the interior of Oregon and southern Idaho.

This species is found across North America but is most widely distributed in the West where it occurs from southern Yukon Territory to the northern Sierra Nevada in California and southern Utah and northern New Mexico in the Rocky Mountains. The range goes east in a narrow north-south distribution near the Canada-United States border to the Atlantic from southern Labrador to northern New England.

This species is a generalist feeding on many kinds of hardwoods such as alders (Alnus spp.) in the Betulaceae, spiraea (Spiraea spp.) in the Rosaceae, and willows (Salix spp.) and quaking aspen (Populus tremuloides) in the Salicaceae.

Xestia oblata has a long flight period and flies somewhat earlier in the year than many of its close relatives. Records from the Northwest extend from mid-May to September, although most are from July and August. It is nocturnal and comes readily to lights.