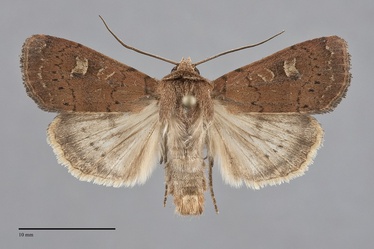 Xestia xanthographa is a medium-sized, red-brown noctuid moth (FW length 15–17 mm) that flies commonly in late summer and fall in the western Pacific Northwest and east to western Idaho near the Columbia River. It usually has ochre-filled orbicular and reniform spots and a light yellowish-gray hindwing. The forewing is fairly even brick-red, often with a gray cast to the median area and distal forewing. The basal, antemedial, and postmedial lines are gray and single, with dark spots or lines where the lines are sharply bent, especially at the tips of the teeth of the postmedial line. The antemedial line is somewhat irregular with several sharp bends, while the postmedial line is smoothly excurved with a nearly straight section near the reniform spot. The subterminal line is a row of pale ochre to gray spots, preceded by a slight gray shade that is darkest near the apex. The orbicular and reniform spots are light gray, evident mostly as pale ochre filling that varies from faint at the periphery of the spots to complete filling. Both spots are usually open anteriorly and posteriorly and the lower reniform spot contains a dark gray spot. The open anterior portion and this dot give the effect of a light hourglass-shaped spot. The claviform spot is very faint, usually only the anterior portion is visible as a light streak posterior to the orbicular spot. The male hindwing is pale yellow-gray with darker dirty gray discal spot, postmedial band that varies from absent to a series of dark lines on the veins, and an irregular marginal band that usually is interrupted by the light ground color near the margin; those of the females are darker gray. The head and thorax match the forewing ground color. The male antenna is bead-like to weakly biserrate.

This species can usually be identified by the ochre yellow spots set against the red-brown forewing ground color. It is most similar to Diarsia rosaria, but this species has a terminal area that is darker than the adjacent wing and double transverse lines. In X. xanthographa the terminal area is similar in darkness as the are medial to the subterminal line and the lines are single.

This Eurasian moth was introduced accidentally into western North America during the twentieth century, although the exact date is uncertain. Its history in the New World is reviewed by Lafontaine (1998). He suggests that it became established after introduction to Seattle, Washington in 1950; however, data in the Pacific Northwest Moths database indicates that it was first found in our region in 1933 in Portland, Oregon. Its range appears to be spreading eastward to Idaho along the Columbia River and its tributaries.

Xestia is a large and diverse genus found throughout temperate, alpine, and arctic portions of the Northern Hemisphere. The genus is subdivided into three subgenera, Xestia, Megasema, and Pachnobia, by Lafontaine (1998). The genus is defined by a thumb-like ventral extension called the pollex which arises from the base of the clasper of the male valve.

This exotic species is widely distributed across Eurasia, and was accidentally introduced into North America.  Today, it is extremely abundant in exotic grasslands of agricultural and urban areas at low elevations west of the Cascades, but also occurs in more natural prairies, oak savanna, oak woodlands, and the riparian zone of coastal rainforests.  It often exists in epidemic numbers in agricultural and other disturbed habitats.

Xestia xanthographa is common in the western portions of Oregon, Washington, and southwestern British Columbia. The range extends east near the Columbia and Snake Rivers to western Idaho.

This species is introduced from Eurasia, apparently several times to various parts of North America (Lafontaine 1998). It is only established permanently in the Pacific Northwest.

This species is a climbing cutworm that prefers feeding on coarse exotic Eurasian grasses such as rye grasses (Elymus spp.) and orchard grass (Dactylis glomerata) in the Poaceae, but will also feed on herbaceous vegetation.

Adults fly in late summer and fall and have been collected from late July to October. They are nocturnal and come readily to lights.

This species is a major pest in cultivated exotic grass seed crops in western Oregon, and often exists at epidemic levels.