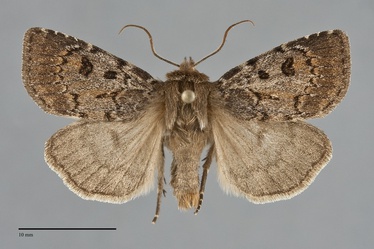 Xestia ursae is a rarely collected arctic and alpine species that is found in the mountains of northern British Columbia in our area. It is medium-sized (FW length 16 - 17 mm in males, shorter in females) with a broad forewing shape and is dark brown with black lines and spots. The ground color of the forewing is medium-dark gray-brown, darker distal to the postmedial line, with scattered warm brown, gray, and black scales. The transverse lines are black adjacent to the median area and of the ground color opposite the median area. The antemedial line is zig-zag and the postmedial line is dentate with a white spot at the tip of each of the teeth. The orbicular, reniform, and claviform spots are similar smudgy black and filled with dark brown. The position of the subterminal line is evident as a transition to a lighter terminal area in some specimens. A thin dark terminal line is present between the veins. The hindwing is dark brown-gray with smudge sooty gray discal spot and weakly scalloped postmedial line. The fringe is two-toned medium and light gray and is bordered by a thin dark terminal line. The head and thorax are dark brown or gray-brown. The male antenna is biserrate.

Females have reduced wings and are probably flightless.

This species is most similar to Feltia nigrita in northern British Columbia. This species has dark brown forewings, but the spots contain light scales and are connected by a black bar in the cell unlike those of X. ursae. It also resembles Xestia atrata which is known from south-eastern British Columbia but likely also occurs in the northern province, but this species lacks dark lines and spots. Agrotis ruta, another species with a northerly distribution, is generally similar to X. ursae in color and pattern. It is larger and has a more elongate forewing shape, a bipectinate male antenna, and a series of dark wedge-shaped spots medial to the subterminal line that X. ursae lacks.

Xestia is a large and diverse genus found throughout temperate, alpine, and arctic portions of the Northern Hemisphere. The genus is subdivided into three subgenera, Xestia, Megasema, and Pachnobia, by Lafontaine (1998). The genus is defined by a thumb-like ventral extension called the pollex which arises from the base of the clasper of the male valve. Over half of the North American species are found in the Northwest. Xestia ursae belongs to the subgenus Pachnobia.

This species is widely distributed on wet arctic shrub tundra across the northern regions of both Eurasia and North America, extending southward on alpine tundra at high elevations in the northern Rocky Mountain region.

This species has a Holarctic distribution. It occurs in eastern Eurasia as far west as Lake Baikal. In North America, X. ursae is found from Yukon Territory to the west shore of Hudson Bay, and as far south as northern British Columbia.

This species is known to feed on huckleberries (Vaccinium spp.) in the Ericaceae.

Males are nocturnal and come to light in areas where it is dark enough to run lights. Females are short-winged and do not fly. This species occurs in July.