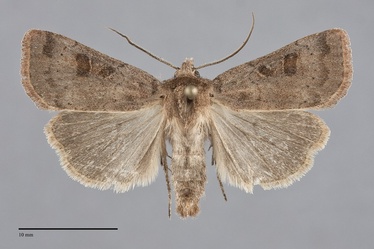 Xestia cinerascens is a fairly small Xestia (FW length 13 - 16 mm) with dull brown-gray forewings marked with darker spots and a shade across the distal forewing. The ground color is even, medium-dark brown-gray, with a slight red tint in some specimens. The transverse lines are thin and dark gray. The antemedial line is undulating, slightly obliqued away from the base at the posterior margin. The postmedial line is scalloped between the veins, drawn slightly toward the base at the costal margin and gently convex toward the outer margin elsewhere. The subterminal line is irregular, evident as the lateral margin of an even thickness dark shade which precedes it across the width of the forewing. The orbicular and reniform spots are similar, light with darker gray-brown filling. The claviform spot is absent. The fringe is similar to the wing in most specimens but distinctly reddish in some specimens with a similar flush across the wing. The hindwing is  dirty gray-brown, slightly darker toward the margin, with a similar color fringe and a barely evident discal spot. The head and thorax are similar to the ground color of the forewings. The male antenna is biserrate with long fasciculations.

Xestia is a large and diverse genus found throughout temperate, alpine, and arctic portions of the Northern Hemisphere. The genus is subdivided into three subgenera, Xestia, Megasema, and Pachnobia, by Lafontaine (1998). The genus is defined by a thumb-like ventral extension called the pollex which arises from the base of the clasper of the male valve. Xestia cinerascens belongs to the subgenus Xestia.

This species is narrowly endemic to the Pacific Northwest, and is usually rare and sporadic in more open habitats.  West of the Cascades, it is mostly found in dry grassland and oak savanna habitats, but also occurs in mixed hardwood-conifer forests at low elevations.  East of the Cascades, it occurs in moist riparian zones along creeks and rivers, and even in disturbed agricultural areas at low elevations.

Xestia cinerascens is widely distributed but uncommon in the interior steppe of the Columbia Basin, eastern Oregon, and Snake River Plain. It also occurs west of the Cascade Range crest in the Willamette Valley and Siskiyou Mountains of Oregon. It has not been collected in western Washington or in British Columbia.

This species has a fairly small range in the North American West. The only records from outside of the Pacific Northwest are from California, where it occurs as far south as Sacramento.

Adults fly predominantly in early fall, with most records from late August to mid-September. It is nocturnal and comes to lights.