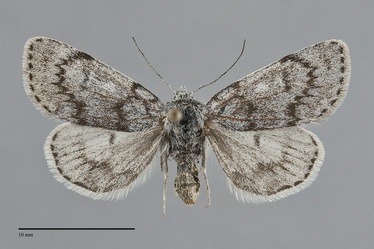 Xestia lyngei is a small (FW length 12 - 15 mm), blue-gray diurnal species that occurs in Yukon Territory very close to the northern border of British Columbia. The forewing is powdery silver blue-gray, sometimes suffused with darker gray basal to the antemedial line or in the median area. The lines are dark gray, broad, and single. The antemedial line is smoothly undulating while the postmedial line is strongly scalloped. The position of the subterminal line is marked by a few dark scales in some specimens. The terminal line is a series of dark spots between the veins. The round orbicular spot is only evident as pale whitish filling. The reniform spot is vertical dark and light smudge. The claviform spot is lacking. The hindwing is light silvery gray with dark gray veins, discal spot, scalloped postmedial line and terminal line. The fringe is light gray. The head and thorax match the forewing ground color. The eyes are reduced in size. The male antenna is bead-like.

This species can be identified by its blue-gray color, pale spots lacking dark borders, and dark lines. It is unlikely to be confused with other alpine species of far northern British Columbia. Xestia intermedia is larger with black-rimmed forewing spots, unlike the pale spots of X. lyngei.

Xestia is a large and diverse genus found throughout temperate, alpine, and arctic portions of the Northern Hemisphere. The genus is subdivided into three subgenera, Xestia, Megasema, and Pachnobia, by Lafontaine (1998). The genus is defined by a thumb-like ventral extension called the pollex which arises from the base of the clasper of the male valve. Over half of the North American species are found in the Northwest. Xestia lyngei belongs to the subgenus Pachnobia.

The larva is described by Lafontaine (1998). It is olive-brown or pale gray-brown with dark lateral speckling and a pinkish lateral line.

This species is widely distributed on dry, rocky mountain tundra across northern Eurasia, Alaska, and Yukon.  It probably does not occur in the Pacific Northwest.

This species is likely in northern British Columbia because it has been collected very close to the border at Montana Mountain in southern Yukon Territory.

Xestia lyngei is found in northern Alaska and in mountains throughout most of Yukon Territory to near the British Columbia border. It also occurs in northern Eurasia from Scandinavia to eastern Siberia.

Adults are diurnal and visit flowers during the day, including moss campion (Silene acaulis). They fly in summer from mid-June to early August.