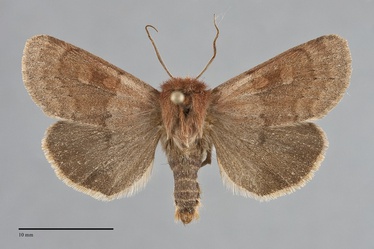 Xestia okakensis is a red-brown (light gray-brown in females), medium-sized noctuid moth (FW length 14 - 16 mm) that flies near timberline in the mountains of northern British Columbia during the summer. Its forewing has a "soft" pattern of darker and light red-brown and smooth lines. The forewing ground color is light to medium-dark red-brown in males, gray-brown in females, darkest in the median area and slightly lighter elsewhere where it is lightly suffused gray. The cell is usually filled with dark red-brown, sometimes also including the area posterior to the cell. The cell is darker blackish brown in a minority of specimens. The transverse lines are a darker shade of the ground color, single. The antemedial line is smoothly undulating and the postmedial line is smooth or scalloped. The pale postmedial line is undulating or slightly irregular and is preceded with darker red-brown. The orbicular and reniform spots are lighter than the ground, sometimes ochre, and are filled with light red-brown. The orbicular spot is oval and is open to the costa. The reniform spot is weakly indented laterally, appearing as an upright oval in most specimens. The claviform spot is darker red-brown to light-colored, absent or relatively small and inconspicuous. The hindwing is medium red-brown with a variable suffusion of smoky gray scales. The discal spot and submarginal band are evident in specimens with light gray suffusion. The hindwing fringe is light ochre with a pink cast. The head and thorax match the forewing in both sexes. The eyes are reduced in size in both sexes. The male antenna is strongly biserrate to weakly bipectinate.

This species is only likely to be confused with Xestia tecta in its northern range because both species are red-brown. This species is usually larger and more contrastingly marked, usually with contrasting gray suffusion outside of the median area and in the forewing spots. Its postmedial line is much more strongly dentate than that of X. okakensis, and its reniform spot is narrow and upright, not rounded.

Xestia is a large and diverse genus found throughout temperate, alpine, and arctic portions of the Northern Hemisphere. The genus is subdivided into three subgenera, Xestia, Megasema, and Pachnobia, by Lafontaine (1998). The genus is defined by a thumb-like ventral extension called the pollex which arises from the base of the clasper of the male valve. Over half of the North American species are found in the Northwest. Xestia okakensis belongs to the subgenus Pachnobia.

This species is found on arctic and alpine shrub tundra.

Xestia okakensis is a northerly species that has been found at Pink Mountain, British Columbia. It likely occurs more widely in northern British Columbia since it is also known from southwestern Yukon Territory.

This species has a Holarctic distribution like many other species in the subgenus Pachnobia. The range in Eurasia is limited to eastern Siberia. In North America it occurs in arctic and subarctic habitats from Alaska to Labrador. Relict mountain populations exist on Mount Albert on Quebec's Gaspee Peninsula and on Mount Washington, New Hampshire. It does not occur south of Pink Mountain in the West.

Males of this species fly at night and can be collected at light in areas where it gets dark enough to run lights. Females fly in the afternoon and visit flowers of moss campion (Silene acaulis). The flight period is July and early August.