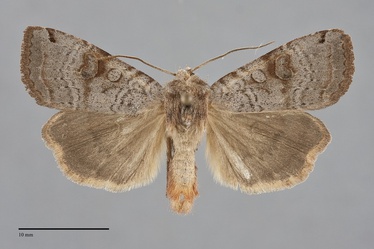 Xestia smithii is a fairly drab, medium-sized noctuid moth (FW length 16 - 18 mm) with two color forms, blue-gray and red-brown, with similar markings in both forms dominated by a black bar near the apex of the forewing. It flies in forests in our region in late summer. The forewing ground color is a shade of brown, light gray-brown to medium reddish brown, or medium dark blue-gray. The markings are similar in both color forms. The anterior median area is red-brown, rarely darker blackish brown, which fills the cell and is fused with a similarly colored median line that extends across the entire forewing. The terminal area is a darker shade of the ground color. Most specimens have a black dot at the base of the wing at the expected location of the basal dash. The basal, antemedial, and postmedial lines are similar, a darker shade of the ground color and are filled with the ground color or slightly lighter scales. All of these lines are smooth except for weak scalloping of the medial component of the  postmedial line. The veins distal to the postmedial line are marked with a parallel row of short, thin, light and dark marks like the tips of a dentate line in some individuals. The pale subterminal line is smooth. A prominent black mark is located medial to this line at the costa. The claviform spot is very faint. The hindwing is light gray-brown suffused with gray, with slightly darker discal spot and a rose pink-tinted fringe. The head and thorax match the forewing ground color. The male antenna is filiform.

This species can usually be identified by its red-brown or blue-gray forewing with a black spot at the subterminal line near the apex. The gray and brown forms of this species are both found in the same populations.

Xestia is a large and diverse genus found throughout temperate, alpine, and arctic portions of the Northern Hemisphere. The genus is subdivided into three subgenera, Xestia, Megasema, and Pachnobia, by Lafontaine (1998). The genus is defined by a thumb-like ventral extension called the pollex which arises from the base of the clasper of the male valve.

Larva is smooth, mottled gray with faint dorsal-lateral chevron markings.  It is illustrated by Lafontaine (1998).

Xestia smithii is widely distributed in mesic forest habitats throughout the Pacific Northwest. It does not occur in the dry interior parts of Washington, Oregon, and Idaho.

This species is found across all of boreal North America, with the range extending south in the mountains. It occurs from central Alaska to the island of Newfoundland in the north. The southern limits are North Carolina in the Appalachian Mountains, east-central Arizona in the Rocky Mountains, and the central Sierra Nevada in California. It does not occur in the Great Plains south of North Dakota nor in the Great Basin.

This species is a broad generalist feeding on many kinds of hardwoods and herbaceous plants in such families as the Rosaceae, Ericaceae, Caprifoliaceae, Betulaceae, Polygonaceae, and Violaceae.  It may have a preference for Rosaceae such as Rubus spp.

Adults are found in late summer, beginning in mid-July and lasting through September in the Northwest. They are nocturnal and come to lights and sugar bait.

Epidemic outbreaks have been reported to cause serious damage to strawberry crops in the Pacific Northwest.