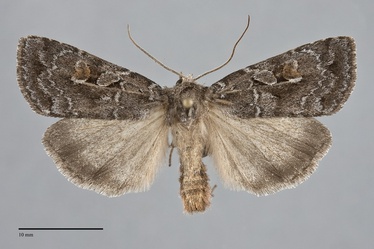 Xestia imperita is a medium-sized noctuid moth (FW length 16 - 19 mm) that flies in conifer forests in the northern and eastern parts of the Pacific Northwest. It has a mottled blue-gray forewing, paler gray orbicular spot, and a red-brown filled reniform spot. The forewing appears powdery due to scattered black scales and often has a slight sheen. The radial and cubital veins are lighter in some individuals. The median area is dark due to a diffuse gray median line. The area preceding the subterminal line is diffuse dark gray across the entire wing, widest at the apex, opposite the cell, and in the fold to form a dark transverse mark with an undulating or broadly scalloped medial border and smooth lateral edge. The basal, antemedial, and postmedial lines are dark gray, double, and have pale gray filling. The antemedial line is oriented straight across the wing and is evenly scalloped on the veins. The postmedial line is scalloped and broadly convex toward the outer margin. The orbicular spot is black and filled with whitish gray, pale gray, or the ground color. It is oval to elongate and bar-like and is open to the costa. The reniform spot is fairly large, black with pale gray filling at the upper and lower ends and filled with red-brown centrally. It and the orbicular spot are close to each other and are joined by a black line across the posterior cell. The claviform is faint or absent, often evident only as the anterior portion which forms a curved black line posterior to the orbicular spot. The hindwing is pale gray-tan with a suffusion of light gray, a faint discal spot, and fairly well-marginated marginal band. It has a distinct sheen and its fringe is pale gray-tan. The head and thorax are gray with a lighter margin on the collar and tegulae in some specimens. The male antenna is slightly biserrate.

Xestia imperita can be recognized by its blue-gray forewing color, pale orbicular spot that is open to the costa, and large reniform spot that is filled centrally with red-brown.

Xestia is a large and diverse genus found throughout temperate, alpine, and arctic portions of the Northern Hemisphere. The genus is subdivided into three subgenera, Xestia, Megasema, and Pachnobia, by Lafontaine (1998). The genus is defined by a thumb-like ventral extension called the pollex which arises from the base of the clasper of the male valve. Over half of the North American species are found in the Northwest. Xestia imperita belongs to the subgenus Pachnobia.

This species is widely distributed in boreal spruce-fir forests across Canada, extending southward at high elevations in subalpine forests through the Rocky Mountains.

Xestia imperita has been collected in the extreme northern and southern portions of British Columbia. It has not yet been found in Washington, although it is likely that it occurs there in the northern Cascade Range.

This species has a broad distribution across arctic, subarctic, and boreal North America and in the Rocky Mountains. The northern distribution extends from southern Yukon Territory and Northwest Territory to Labrador and northern New England. The range extends to southern British Columbia and southern Colorado in the mountains.

This species is known to feed on huckleberries (Vaccinium spp.) in the Ericaceae.

Adults are found in July and August. They fly at night and are attracted to light.