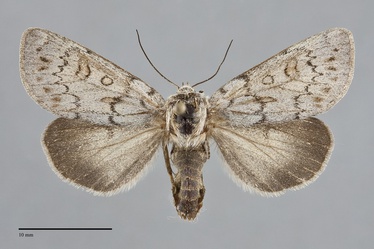 Xestia intermedia is an extremely rarely collected subarctic and alpine moth that has been found once in northern British Columbia in our region. It is uniform light blue-gray with thin black lines and spots. It is small to medium-sized (FW length 14 - 17 mm) with a rounded forewing shape. The color is even light blue-gray, with warm red tints in the reniform and claviform spots in some specimens. The antemedial line is irregular and thicker than the postmedial line which is deeply scalloped between the veins. The position of the subterminal line is indicated by a series of black wedge-shaped marks. The orbicular spot is small and round. The reniform is incomplete anteriorly and posteriorly. The claviform spot is small to medium-sized. The hindwing is light yellow-gray with a dark marginal band and pale fringe. The head and thorax match the forewing. The male antenna is biserrate.

This species can be identified by its pale gray color and simple pattern of black lines. It resembles the common and widespread Protolampra rufipectus but lacks the dark brown head and collar of that species. Xestia lyngei, a smaller gray day-flying moth that occurs near the British Columbia-Yukon Territory border is blue-gray with dark lines. It has a pale orbicular spot that lacks a dark outline and its hindwing is lighter whitish gray with dark veins.

Xestia is a large and diverse genus found throughout temperate, alpine, and arctic portions of the Northern Hemisphere. The genus is subdivided into three subgenera, Xestia, Megasema, and Pachnobia, by Lafontaine (1998). The genus is defined by a thumb-like ventral extension called the pollex which arises from the base of the clasper of the male valve. Over half of the North American species are found in the Northwest. Xestia intermedia belongs to the subgenus Pachnobia.

Xestia intermedia has been found near Summit Lake, British Columbia by Chris Schmidt.

This species is found in eastern Siberia as well as in arctic and subarctic North America. Prior to its discovery in British Columbia it was only known from a few localities in Alaska and northern and central Yukon Territory.

Adults are diurnal and probably visit flowers during the day. They fly from mid-June to late July across its entire range (Lafontaine 1998)