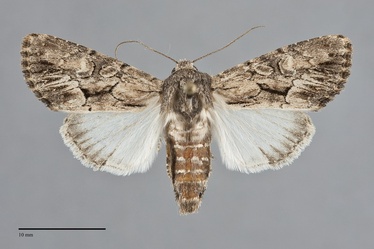 Apamea burgessi is a medium-sized to large moth (FW length 15–21 mm) that flies in southern Oregon and Idaho during the fall. It has a streaky dull tan and dark gray forewing with a black median dash and a mainly white hindwing. The outer margin of the forewing is weakly scalloped, especially near the anal angle. The ground color is light to medium-dark gray-brown, lightest in the mid-median area and adjacent subterminal area. The entire costa and adjacent cell, posterior wing from the fold to near the margin, and the subterminal area near the lower reniform are slightly to much darker brown-black. The terminal area is darker brown-black with black streaks between the veins except at the apex. The terminal area is widest opposite the cell and in the fold where the gray color extends into the adjoining subterminal area, forming two ill-defined dark triangular areas. The veins are dark in the subterminal area. A thin black dash is present at the base and a thicker median dash is present in the fold; a similar dash-like mark is present near the posterior margin near the base. The basal line is limited to paired dark gray marks on the costa. The antemedial line is double with weak gray inner and black outer components, irregularly bent with an apex lateral segment on the mid-wing at the base of the median dash. The median line is gray, diffuse and faint, sometimes absent. The postmedial line is similar to the antemedial line with black component abutting the median area at the median dash, strongly scalloped with the tips of the teeth angled radially like spokes on a wheel at the excurved segment around the reniform spot, oblique toward the base below the spot with a slight bend apex median at the dash. The subterminal line is a series of small spots of the ground color between the veins, preceded by a series of strong long black wedges between the veins from opposite the cell to near the posterior margin, and followed in the terminal area by the black marks described above. The moderately large orbicular and reniform spots are partially outlined in black. The orbicular spot is a moderately large tilted oval, filled with a light shade of the ground color peripherally and a darker central ocellus. The reniform spot is kidney-shaped,  filled with a very pale shade of the ground and a darker grayish medial crescent. The claviform spot is black, with the posterior wall forming part of the median dash. The hindwing is pure white with dark gray veins and ill-defined marginal band, thin in males and wider, approximately a fourth of the width of the wing, in females. The hindwing fringe is white with a variable gray base. The head and thorax are dark gray-brown with a thin black transverse line across the median collar. The male antenna is bead-like.

This species can be recognized by its pale gray-brown forewing with brown-black markings, black median dash, and black marks on the distal wing that produce a streaked appearance in combination with pure white hindwing ground color. Apamea longula has a similar forewing pattern, usually more uniform gray-brown, but its hindwing is gray-brown rather than white. Fishia discors has a similar forewing pattern and white hindwings in males (dark gray in females). The color of its wing is much darker gray-brown with reddish tints.

This species flies on the dry short-grass prairies of the Great Plains, extending westward on dry sagebrush steppe at low elevations through the Great Basin region.

Apamea burgessi occurs in southeastern Oregon and the Snake River Plain of southern Idaho in our area.

The center of the distribution of this species is the western Great Plains and Intermountain Region where it occurs as far north as southern Alberta, as far south as central Texas and southern Arizona, and as far west as southern Oregon. There are isolated records on remnant prairie habitats to Lake Michigan, and a disjunct population is present near the Atlantic Ocean from New Jersey to Massachusetts.

The early stages of A. burgessi are unknown. It undoubtedly feeds on the roots of grasses (Poaceae) like other members of the genus.

The flight season of this species is fall, usually mid-September to early October. It is nocturnal and comes to lights.