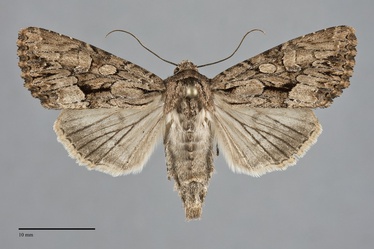 Apamea longula is a medium-sized to large moth (FW length 17–22 mm) that flies in a variety of dry-side habitats from steppe to timberline during the summer and early fall. It has a streaky gray-brown forewing with black basal and median dashes, and a light gray-tan hindwing. The apical forewing is relatively long and the outer margin is weakly scalloped. The forewing color is slightly mottled gray-tan, slightly darker in the median area and usually slightly darker gray in the terminal area. The posterior subterminal area is usually slightly lighter gray-brown, light gray in a few specimens. Black dashes are thin at the base and thicker across the median area; a similar dash-like mark is present near the posterior margin medial to the antemedial line. The basal and antemedial lines are gray and black, partially double and incomplete. Segments of the basal line are evident on the costa, the cubital vein, and near the posterior margin. The antemedial line is more complete, usually zigzag between the veins, often with black segments in the cell, at the base of the median dash, and above the trailing margin. The median line is gray, diffuse, faint to dark. The postmedial line is scalloped and has black inner component and weaker absent to gray outer one, usually strongest in the fold at the end of the median dash where the segment between CuA2 and 1A+2A is dark even if the rest of the line is weak. The line is drawn toward the base on the costa, is smoothly curved around the reniform spot and then strongly angled toward the base to the posterior margin. The subterminal line is pale brown, sinuous, usually incomplete. It is preceded by two or three strong black chevrons in the mid-terminal area and is followed by several black lines between the veins in the adjacent terminal area. The terminal line is a series of black triangles. The fringe is checkered brown and dark gray. The moderately large orbicular and reniform spots are partially outlined in black. The orbicular spot is oval with black on the medial and lateral edges, filled with the ground color or a lighter shade. The reniform spot is kidney-shaped with black medial outline and poorly defined lateral margin, sometimes with a short spike-like extension toward the base from the medial posterior margin, and is filled with the ground or a lighter shade of it, a slightly darker central lunule, and a gray spot at the lower end. The claviform spot is black, with the posterior wall forming part of the median dash. The hindwing is light grayish tan with slightly darker gray suffusion near the margin, a thin discal spot, weak postmedial line, dark veins and thing terminal line. The hindwing fringe is white with a tan base. The head and thorax are gray-brown with a thin black transverse line across the base of the collar. The male antenna is weakly biserrate or bead-like.

This species can usually be identified by its large size, uniform gray-brown forewing color, black basal and median dashes, black wedges in the subterminal area, and a gray-tan hindwing. The forewing is similar to that of Apamea burgessi, a fall-flying species that occurs in southern Oregon and Idaho, but its hindwing is nearly entirely pure white with limited dark gray near the margin. Apamea devastator, a ubiquitous and common moth that flies in a variety of habitats, is similar in color. It lacks the median dash of A. longula and has a shorter apex on the forewing and busier pattern of lines and spots. Lacanobia subjuncta is a member of the tribe Hadenini with a similar size, color, and pattern as A. longula. Its orbicular spot is larger and rounder than that of A. longula. It also has fine hairs on the surface of the eye like other members of its tribe.

This species is widely distributed throughout most of western North America in dry, open habitats.  In the Pacific Northwest, it is uncommon to moderately common on sagebrush steppe, in juniper woodlands, and in open ponderosa pine forests at low to middle elevations east of the Cascades. It is found at high elevation near timberline in the northern Cascade and Coast Ranges.

Apamea longula is widespread east of the Cascade Crest as far north as south-central British Columbia, although it has been recorded from the Atlin area of extreme northwestern British Columbia suggesting that it might be widespread further north in the province. It has not been found in most of central Idaho, but it is found on the Snake River Plain. The distribution is limited to southwestern Oregon west of the Cascades.

This species is widespread in western North America from the western Great Plains to eastern California. It occurs in southern Alberta, with isolated records further north in Alberta, Yukon Territory, and central Alaska.

No information is presently available regarding the larval biology of this species, but it is probably a soil-surface feeding cutworm that feeds on grasses (Poaceae) based upon closely related species.

Apamea longula has a flight season that extends from early July to September in the Northwest. It is nocturnal and comes readily to lights.