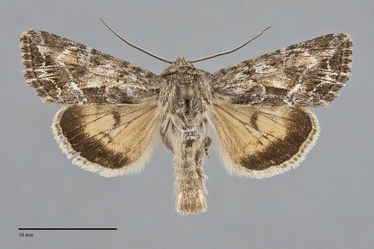 Apamea inordinata is a relatively small species of Apamea (FW length 13 - 17 mm) that flies in grassland habitats in late spring. It has a mottled gray-brown forewing and orange-ochre hindwings with a well-defined dark marginal band. The forewing is mottled and streaked medium gray-brown, lightest ochre to tan in the central median area and darkest gray in the terminal area and median area posterior to the fold. A black basal dash is usually present, and a black median dash connects the antemedial and postmedial lines across the lower median area. The subterminal line is preceded by a series of black wedges across the mid-wing but not at the costal or trailing margins. The antemedial and postmedial lines are gray, double, and filled with whitish gray. The more prominent postmedial line is smooth, excurved to almost touch the subterminal line at the level of the anterior cell then parallel to the outer margin to the trailing margin. The subterminal line is whitish gray, complete, forming a sharp W-mark to the outer margin on veins M3 and CuA1. The fringe is checkered gray with white at the distal veins. The orbicular spot is ovoid or bar-like, of an outer black and inner white components, and an central line of the ground color. The reniform spot has an outer black and an inner pale gray component and is filled with the ground color but is often incomplete and relatively inconspicuous. The claviform spot is small and fused to the median dash when present. The hindwing is ochre-yellow with a slight orange tint. It is marked with blackish gray thick discal spot, well-defined marginal band on the outer third of the wing, a thin postmedial line, and veins. The hindwing fringe is whitish with ochre and gray on the inner half. The head and thorax are powdery gray-brown with a weak dark line across the collar and margins on the tegulae. The male antenna is filiform.

This species can be identified by its banded ochre yellow hindwing. The streaky forewing is similar to that of several species of Anarta in the tribe Hadenini but all of our desert-flying species of Anarta have dark gray hindwings.

The populations of A. inordinata are arranged in three subspecies. The nominate subspecies is found along the Atlantic Coast. Subspecies A. i. semilunata (Grote) is found across much of the range of this species, including most of the Pacific Northwest. It has a paler hindwing than A. i. inordinata. Subspecies A. i. olympia Crabo is restricted to the glacial outwash prairies of the south Puget Sound region in western Washington. It is smaller and darker than other populations of A. inordinata.

This species is widely distributed on dry open prairies and in sandy habitats across the northern United States.  In the Pacific Northwest, it is probably most common in sand-dune habitats at low elevations within the Columbia Basin east of the Cascades, and is rare on open sagebrush steppe.  In central Oregon, it is sometimes common on rangelands that have been recently burned in wildfires.  West of the Cascades, an isolated population occurs on gravelly, glaciated prairies at low elevations in western Washington.

Apamea inordinata is predominantly a species of open sage steppe in the Pacific Northwest. It occurs in this habitat east of the crests of the Coast and Cascade Ranges from south-central British Columbia through eastern Washington, eastern Oregon, and southern Idaho. Subspecies A. i. olympia is restricted to the south Puget Sound region in Pierce and Thurston Counties. Apamea inordinata has also been collected near the Peace River in north-eastern British Columbia.

This species has a relatively narrow north-south distribution across North America, occurring in the northern United States and extreme southern Canada. The range extends furthest south in Utah, Colorado, and Nebraska. It is restricted to the Great Lakes region in the upper Midwest and from New Jersey to eastern Quebec along the Atlantic Coast.

This species is single brooded with adults on the wing in the late spring and early summer. Almost all Pacific Northwest records are from early May to mid-June. It is nocturnal and comes to lights. Occasional specimens fly during the day.