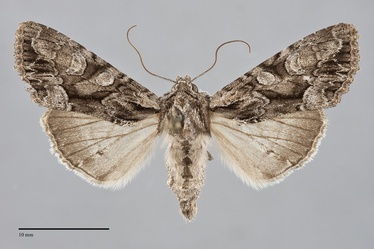 Apamea unita is a rarely collected medium-sized brownish gray moth (FW length 15–20 mm) that occurs in Idaho and eastern Oregon in the Pacific Northwest.  The forewing has a slightly scalloped outer margin. It is slightly mottled brownish gray. The mid-median area between the orbicular and claviform spots and the median line is paler, usually light gray like the filling of the orbicular post. The anterior wing base, median area distal to the reniform spot, and the subterminal area distal to the cell and in the fold are slightly lighter as well. The posterior base and median area, the mid-subterminal area, and the terminal area other than the apex are slightly darker and browner. Thick black basal and median dashes are present, with a similar dark mark above the trailing margin across the wing base. Many of the distal veins are black, thickest in the terminal area. The lines are dark to black, double filled with a light shade of the ground color. The antemedial line is excurved with apex at the median dash, sharply toothed toward the base on the veins. The median line is dark gray, slanted from the costa to CuA2, then bent 90° to run parallel to the postmedial line to the posterior margin. The postmedial line is scalloped, drawn sharply toward the base below the costa, very slightly convex opposite the reniform spot, then nearly straight at an oblique angle toward the base to the posterior margin. The subterminal line is pale, irregular with a moderately strong W-mark on M3 and CuA2. It is preceded by black wedges at the W-mark. Black triangles between the veins is the terminal. The fringe is weakly checkered gray-brown. The orbicular and reniform spots are outlined in black. The orbicular spot is large, oval, filled with light gray similar to the adjacent median area. The  appears to extend out toward the anal angle of the wing almost to the post-medial line, forming a light, rounded lobe-shaped patch. The hindwing is pale gray to tan and darkens along the outer margin.

This species can usually be recognized by its pale gray color and pattern that includes black dashes, large pale-filled orbicular spot and the adjacent pale area on the mid-median area. It should only be suspected in the mountains in the eastern part of our area, particularly in eastern Idaho. Both wings are similar to those of Apamea spaldingi, usually an early-season moth, but the orbicular spot of this species is elongate rather than widely oval, and the pale gray adjacent patch is lacking from the central median area. Apamea occidens is another similar-looking moth that flies with A. unita. Its postmedial line is strongly deviated medial below the reniform spot where it is nearly perpendicular to the posterior margin rather than evenly oblique as in A. unita. The Hadenine moth Lacanobia subjuncta, especially the pale interior form ("eleanora") is strikingly similar in most elements of the forewing pattern. It is browner than A. unita, has an even larger pale-filled orbicular spot, and lacks a pale gray area adjacent to this spot. As with other members of this tribe, it has eyes that are covered by fine hairs, lacking in Apamea.

This species is found in dry, open conifer forests and mountain meadows at higher elevations in the Rocky Mountain region. It appears to be very rare.

Apamea unita has only been found a few times in the Pacific Northwest. These records are from the Blue Mountains of eastern Oregon and adjacent western Idaho. It is likely to be more widespread in Idaho than these records suggest.

Apamea unita has been found in widely scattered localities in the Rocky Mountains from southern Alberta to Utah, Colorado, and Arizona. It is also found in the Black Hills of South Dakota and the Wind River Range, Wyoming. A record from Baja California is shown in Mikkola et al. (2009).

No information is presently available regarding the larval biology of this species, but it is probably a soil-surface feeding cutworm that feeds on grasses (Poaceae) like related species.

The flight season of A. unita is July and August. It is nocturnal and comes to lights.