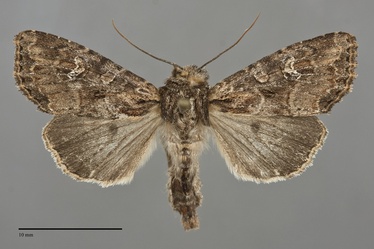 Apamea unanimis is a relatively small Apamea (FW length 14–16 mm) that was introduced from Eurasia and was reported recently from southwestern British Columbia. It has a yellowish, reddish, or olive-tinted gray-brown forewing with a multi-colored reniform spot. The forewing is slightly mottled medium-dark gray-brown with a slight olive tint, varying to yellow-gray to reddish brown. The costa and terminal area are slightly darker gray. A short black basal dash and a similar mark near the trailing margin of the base are present. The veins are often lighter gray to white, especially near the reniform spot. The transverse lines are gray, double filled with a light shade of the ground color. The antemedial and postmedial lines are faint, most evident as the light filling. The antemedial line is strongly arched toward the outer margin with apex at the fold. The postmedial line is nearly straight lateral to the reniform spot, bends and touches the lower spot, and is smoothly concave toward the base below the spot. The median line is gray, angled from the costa to the anterior reniform spot and then extending from the lower spot to the margin near the postmedial line. The subterminal line is pale, irregular, preceded by a gray mark on the costa and one or two gray wedges on the mid-wing. The terminal line is a series of dark gray spots. The fringe is checkered ground color and dark gray-brown. The orbicular and reniform spots are outlined in black. The orbicular spot is circular to ovoid, filled with a light shade of the ground peripherally and the ground color centrally. The reniform spot is multicolored with the ground color medially, ochre centrally, and white distally. The claviform spot is small. The hindwing is gray, with darker marginal area, large discal spot, veins, and terminal line. The hindwing fringe is two-toned gray. The head and thorax are dark gray-brown, lighter centrally, with slightly darker lines near the edges of the collar and tegulae. The male antenna is bead-like.

This species can usually be recognized by the multicolored reniform spot on a yellow-gray, olive gray-brown, or red-brown forewing. It is most similar to one of the forms of Apamea indocilis, but it usually has a black bar across the fold that A. unanimis lacks, its lines are better defined, and the subterminal line forms a stronger W-mark on the mid-wing that divides the dark gray or black terminal area into two triangular spots. Apamea vultuosa is also similar, but it is warmer brown than A. unanimis, has a much more elongate orbicular spot, and has two distinctive dark wedge-shaped marks on the distal forewing that A. unanimis lacks.

This species is found near beaches and coastal marshes where its foodplants grow.

As of 2013, Apamea unanimis has been collected on Vancouver Island and in Vancouver in southwestern British Columbia. It is likely that it will spread rapidly along the Pacific Coast.

This species is native to Eurasia and was first introduced into North America in the East. Mikkola et al. (2009) state that it has quickly spread to become the most common Apamea in its range following its introduction into the Ottawa, Ontario area in 1991. Its North American range is in a narrow north-south band across southern Canada and the northern United States from Minnesota to Newfoundland.

The larva lives on beach grasses such as Phragmites, Phalaris, and Glyceria (Poaceae) (Mikkola et al. 2009). It ties several grasses together to produce an enclosure (Mikkola & Jalas 1979).

The flight season of A. unanimis is June and July. It is nocturnal and comes to lights