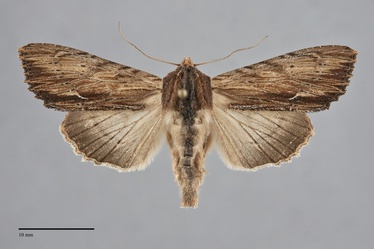 Apamea cuculliformis is a medium-sized to large moth (FW length 19–22 mm) with longitudinally streaked tan forewings with dark brown along the entire trailing margin and in the terminal area. The forewings appear long and have a toothed margin, accentuated by a terminal line of long brown wedges and light triangles in the fringe at the ends of the veins. The color is tan, streaky appearing due to dark veins with light tan on each side and darker red-brown in the interspaces on the posterior and distal wing. The posterior margin is dark red-brown to gray-brown, and the terminal area is similar, divided into two triangular patches where the subterminal line extends to the outer margin. The basal, antemedial, and postmedial lines are double, dark brown or gray but mostly evident as stripes on the costa. The smooth course of the postmedial line is marked by paired dark dots on each vein, and a curved white line in the fold. The reniform spot is two black dots in a patch of tan color; the other spots are absent. The hindwings are pale tan gray, slightly opalescent at the base, with a dark brown-gray marginal band, and dark gray discal spot, veins, and postmedial line. The head and base of the collar are light brown. The rest of the thorax is darker red-brown with gray brown stripes across the collar and at the edges of the tegulae. The central thorax is dark blackish brown with anterior tufts; this color and tufting extend about two-thirds of the distance to the end of the abdomen. The male antenna is beaded.

This species is easily distinguished from other Northwest moths by its streaky tan forewing with darker trailing and outer margins. It can also be identified by the dark dorsal stripe on the thorax and abdomen. The most similar species is Alastria chico. It has other colors on the forewing, including light gray, with a more complex pattern. Apamea lignicolora is a brown species that lacks the contrast between the posterior and anterior wing.

This species is widely distributed along the West Coast at low to middle elevations in dry grasslands and oak savanna, extending to dry grasslands and open ponderosa pine forests in the Rocky Mountain region.  In western Washington and southwestern British Columbia it occurs in open forests and near the ocean. It is usually rare and sporadic, but appears in disturbed agricultural grass fields and pastures both east and west of the Cascades.

Apamea cuculliformis is found on both sides of the Cascade Range, reaching southern British Columbia on both sides of the mountains. It is found throughout most of the Columbia Basin in Washington, and also occurs in eastern Oregon. The range is more limited west of the mountains. It is only found in the rain shadow near the Gulf of Georgia north of Oregon.

This species has a fairly limited distibution outside of the Northwest. It occurs in the Rocky Mountains, with isolated records in several states as far south as Colorado. It also occurs in western California from San Francisco Bay to the San Diego region.

The flight season of A. cuculliformis is relatively early for an Apamea, beginning in mid-May and lasting to early July. It is nocturnal and comes to lights.