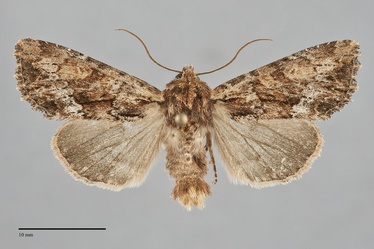 Apamea tahoeensis is a medium-sized moth (FW length 17–20 mm) that flies in the Cascade Range and Warner Mountains of Oregon. It has a mottled, reddish-brown forewing with a complex pattern that includes powdery pale blue-gray in the subterminal area and wing base, dark veins in the subterminal area, and ochre-brown filling of the reniform spot. The ground color is powdery mottled ochre-brown and red-brown, lightest yellow at the base, and the mid-median area from the fold to the cell, in the anterior subterminal area, and at the apex. The wing base and subterminal area are usually suffused with silver-gray, strongest in the posterior subterminal area. The terminal area except the apex is darker red-brown or gray-brown. A thin black basal dash is present, and there is a similar black mark near the posterior margin at the base. A weak median dash or dark suffusion is usually present in the fold. The veins in the subterminal area are black, and some of the ones on the more proximal wing are powdery gray. The basal, antemedial, and postmedial lines are red-brown to dark gray, partially double and filled with the ochre and light gray colors. The basal line is a pair of spots on the costa. The antemedial line is variable in darkness and is often diffuse, angled toward the outer margin with a bent toward the base at the posterior margin, slightly irregular with teeth toward the base on the veins. The median line is gray and very diffuse. The postmedial line is scalloped, often with spots on the veins distal to the teeth, weak on the anterior wing where it is usually filled with ochre and curves smoothly around the reniform spot, then typically filled with silver-gray and strongly angled toward the base to near the antemedial line. A short segment in the fold is prominently black and light gray. The subterminal line is ochre, thin, uneven with a sharply-pointed W-mark on M3 and Cu1 that reaches the margin. It is preceded by a red-brown shade, and sometimes by two dark spots at the anterior W-mark. The terminal line is dark gray. The fringe is red-brown to dark gray-brown with lighter transverse lines at the ends of the veins. The orbicular and reniform spots are partially outlined in red-brown and filled with ochre and some darker elements. The orbicular spot is weakly oval, filled with light ochre with a slightly darker center, less often the ground color. The reniform spot is kidney- or hourglass-shaped, weakly outlined on the lateral side, filled with light ochre, red-brown ground color medially and inferiorly. The claviform spot is absent or gray, usually fairly small. The hindwing is light grayish yellow-tan, with slightly darker gray marginal bands, veins, discal spot, and terminal line. The hindwing fringe is pale tan. The head and thorax are red-brown or brown with darker lines near the edges of the collar and tegulae. The male antenna is bead-like.

This moth can usually be identified by its moderate size, powdery red-brown color, gray suffusion traversed by black veins in the subterminal area, and complex pattern of dark markings. It is most similar to Apamea auranticolor, found in extreme southeastern Idaho, and Apamea sora, found further north but can be distinguished from them by locality. Populations of A. tahoeensis from the Northwest have the most indistinct pattern of these three species and are the most likely to have black veins traversing the blue-gray subterminal area. Apamea tahoeensis is most likely to be mistaken for Apamea antennata, a common species throughout most of our area. This species is larger, has more gray in the posterior median area, and a darker terminal area than A. tahoeensis.

This species is common and widely distributed in open conifer forests of spruce and fir at high elevations in the Siskiyou Mountains and southern Cascades, and also in open ponderosa pine forests at middle elevations along the east slope of the Cascades.  It is replaced in these habitats by the closely related A. sora in the northern Rocky Mountains and northern Cascades, and by A. auranticolor in the southern Rocky Mountains.

Apamea tahoeensis is found in Oregon in the Northwest, both in the Cascade Range and in the mountains along the southern border. The range might extend into the Blue Mountains in Oregon. The relationship between A. tahoeensis and A. sora warrants further study in this area.

The range of this species extends south into northern California, ranging south through the Sierra Nevada.

The flight period of this moth is the summer, usually in July and August. It is nocturnal and comes to lights.