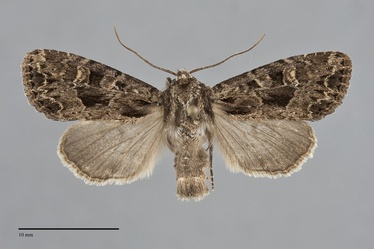 Apamea indocilis is a medium-sized yellow-tan to brown moth (FW length 15–19 mm) that flies in the western and northern portions of the Northwest during early summer. It has three distinct forms that differ in the amount of dark brown on the forewing, the lightest with distinct black median dash and black spots on the outer wing and the darkest is dark gray-brown with light markings in the reniform spot. The light form has mottled yellow-tan forewings, usually slightly darker gray or reddish in the median area and sometimes entirely suffused with red-brown. The dark forms are increasingly gray-brown from relatively light with clearly evident darker markings to so dark that the markings are obscured. Black marks include a short basal dash, a streak near the trailing margin medial to the antemedial line, and a thick median bar distal to the claviform spot. These marks are variable in strength, most evident in pale forms. The cell is often dark in the light form. The terminal area is gray to black, separated into two distinct triangles by the W-mark of the subterminal line. The basal, antemedial, and postmedial lines are gray, partially double and filled with a slightly lighter shade of the ground color in each form. The basal line is mostly evident on the costa. The antemedial line is slightly irregular with notches toward the base on the veins, strongly angled toward the outer margin from the costa to the base of the median dash and then bent inward to the posterior margin. The median line is gray, diffuse, most evident from the costa through the cell. The postmedial line is scalloped and very weak opposite the cell where it is often evident only as a transverse segment of the pale filling, becoming stronger from the lower pole of the reniform spot to the margin where it is smooth and strongly angled toward the base. Small spots on the veins are present near the line in pale specimens. The subterminal line is pale, complete and sinuous in light forms to spotty and irregular in dark ones, offset below the apex, drawn towards the base opposite the cell and in the fold, and forming a moderate W-mark on the mid-wing at veins M3 and CuA1. The line is often preceded by a gray shade or series of relatively small black wedges on the mid-wing. The terminal line is a series of black spots. The fringe is checkered yellow and dark gray in pale forms and dark brown-gray with weak lighter basal spots in dark ones. The spots are partially outlined in black. The orbicular spot is a large oval and the reniform spot is large and kidney-shaped. These spots are filled with the ground color, appearing uniformly pale in light forms. The reniform spot is partially outlined in light ochre spots, greatest along the lateral side, in the darker forms. A small claviform spot is usually evident separate from the black filling of the fold distal to it. The hindwing is pale gray-tan, darker in dark forms, suffused with gray toward the margin that is incomplete near the anal angle. Darker discal spot, postmedial line, and terminal line are present. The fringe is pale yellow tan to dark gray-brown depending on the form. The head and thorax are light yellow-tan with dark brown on the collar and tegulae in the light form to dark gray-brown in the dark form. The male antenna is bead-like.

This species is widely distributed throughout much of North America in moist forest habitats.  In the Pacific Northwest, it is usually rare and sporadic in coastal rainforests and mixed hardwood-conifer forests west of the Cascades, and in mixed hardwood-conifer forests of the Rocky Mountain region.  This species is considered to be sensitive to forest management, depending on disturbances for habitat.

Apamea indocilis is found west of the Cascades, particularly along the ocean shore, from Vancouver Island to southern Oregon. The range extends east across southern British Columbia and northern Washington to the Blue Mountains of northeastern Oregon. It occurs in western Montana and eastern Idaho in the Rocky Mountains.

The distribution of A. indocilis extends across southern Canada and the adjacent northern United States to northern Newfoundland. The southern limits of its range are New Jersey along the Atlantic Coast, South Carolina in the Appalachian Mountains, southern New Mexico in the Rocky Mountains, and San Francisco Bay along the Pacific Coast.

Adults fly from late May through July in our region, most commonly during June. They are nocturnal and come to lights.