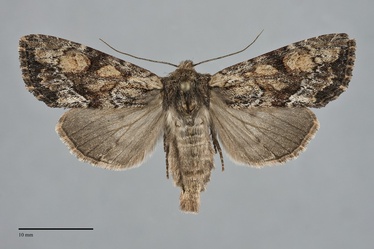 Apamea sora is a medium-sized to large moth (FW length 17–21 mm) that flies in boreal and montane forests in the northern part of the Pacific Northwest and British Columbia during the summer. It has mottled wings that vary in color from orange-brown, ochre-tan, violet-gray, or gray, to black. The outer margin of the forewing is lightly scalloped. The ground color is medium-dark warm orange-brown, often mottled with ochre-tan. The wing base and subterminal area are usually strongly suffused with silver-gray, especially in the posterior subterminal area. The terminal area except the apex is gray, most often very dark. Variable gray suffusion is often present, often sparing the light gray portions. A thin black basal dash is usually present, and a weak median dash is often present. The basal, antemedial, and postmedial lines are red-brown to dark gray, partially double and filled with the ground and light gray colors. The basal line is a pair of spots on the costa. The antemedial line is variable in darkness, sometimes only evident as the light filling, and is angled toward the outer margin with teeth toward the base on the veins. The median line is dark and very diffuse. The postmedial line is scalloped, often with spots on the veins distal to the teeth, weak on the anterior wing where it is usually filled with the tan-ochre and curves evenly around the reniform spot, then typically filled with silver-gray and strongly angled toward the base to near the antemedial line. A short segment in the fold is prominently black and light gray. The subterminal line is ochre, thin, very uneven with a moderate W-mark on M3 and Cu1 that sometimes reaches the margin. It is preceded by a red-brown shade, and variably by two dark wedges at the anterior W-mark. The terminal line is dark gray. The fringe is red-brown to dark gray-brown with lighter transverse lines at the ends of the veins. The orbicular and reniform spots are partially outlined in red-brown, usually remaining lighter in heavily suffused specimens. The orbicular spot is round to oval, filled with light ochre, less often the ground color, and sometimes a weak central ocellus. The reniform spot is kidney- or hourglass-shaped, weakly outlined on the lateral side, filled with light ochre, rarely the ground color, darker ground color or dark gray inferiorly, and often with a dark thin central lunule. The claviform spot is absent, black, or gray, usually fairly small. The hindwing is gray-tan with extensive gray suffusion, slightly darker gray veins, discal spot, and terminal line. The hindwing fringe is pale tan with a pink tint. The head and thorax are gray-brown to dark with darker brown lines near the edges of the collar and tegulae. The male antenna is bead-like.

This species can usually be identified despite the large amount of variation due to its brown, ochre, silver-gray, and dark gray color and pattern of silver-gray basal and subterminal areas and ochre-filled spots. It is closely similar to Apamea tahoeensis which occurs in western Oregon and Apamea auranticolor of the Rocky Mountains in southeastern Idaho, but does not occur with them so that specimens can be identified solely on the basis of locality. Apamea sora is the largest, darkest, and grayest of these three sibling species. The most likely species with which it is likely to be confused is Apamea antennata which is common and widespread in the southern range of A. sora. It tends to be larger, less mottled but with more violet-gray color in the median area, and has spots that are less contrastingly yellow than those of A. sora. Lightly suffused specimens of A. sora are most likely to be confused with A. antennata. On the underside they are darker and grayer than those of A. antennata which tend to have a reddish color.

This species is common in high-elevation conifer forests of spruce and fir, and in middle-elevation ponderosa pine forests of the northern Cascades and northern Rocky Mountains.

Apamea sora is found in mountains and boreal forests of the Washington Cascade Mountains, the Blue Mountains of northeastern Oregon, and central Idaho. The range extends to the northern border of British Columbia. This moth is replaced by the similar species A. tahoeensis in the Cascade Mountains of Oregon. The ranges of these moths approach each other where the Ochoco Mountains abut the Cascades, and there might be a zone of overlap in central Oregon.

This species has only been found in the Alaska Panhandle and in the Rocky Mountains of western Alberta outside of the Pacific Northwest.

Adults fly from June to early September but are most commonly collected in late July and early August. This species is nocturnal and is attracted to lights.