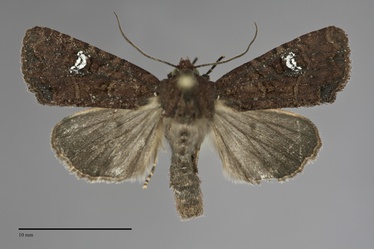 Mesapamea secalis is an introduced, variable, stout, small to medium-sized (FW 12.5–14 mm) stout noctuid that typically has a nondescript dark forewing with a prominent light reniform spot. Its range is spreading in western British Columbia and Washington. The forewing can be light olive brown, dark reddish-brown, or blackish-brown. The pattern is variable, mottled, nearly uniform, or light with contrasting darker medial area. Dark gray patches in the terminal area opposite the cell and near the tornus are conspicuous in light individuals, but barely evident in dark ones. Transverse lines are double, gray to black, with filling slightly lighter than the ground. The reniform spot is conspicuous, with ochre, white, or both colors varying from peripheral spots to filling the spot. The orbicular and claviform spots are present but inconspicuous. A faint basal dash is evident only in light specimens. The hindwing is dark brownish gray with small or absent discal spot. The head and thorax match the forewing in color. The male antenna is filiform. Most North American specimens are dark and nondescript, except for the light reniform spot.

Mesapamea secalis resembles several other Apameini species in our region. Apamea unanimis is larger than M. secalis (FW 14–16 mm) and differs in having a prominent forewing black basal dash and a large ventral hindwing discal spot. Apamea cogitata is also larger than M. secalis, forewing longer than 16 mm, and is more uniform rich dark red brown. Oligia tusa overlaps M. secalis in size and is similar to the dark red-brown form. The postmedial line below the reniform stigma is scalloped in O. tusa, smooth in M. secalis. Also, the forewing posterior to the claviform spot and basal to the postmedial line is darker than the rest of the wing in O. tusa, not so in M. secalis. Xylomoia indirecta resembles light forms of M. secalis but differs in having a black median dash across the fold and a black triangular mark in the postmedial area near the tornus.

Mesapamea secalis is found in open urban and natural environments below 550 meters. It has been collected most commonly in densely populated urban situations.

Mesapamea secalis is widespread in Eurasia where it occurs in most of the area east of the Ural Mountains. The range extends east into Russia without reaching the Pacific Coast.

The larvae feed on a variety of grasses, including most economically important cereal grains (wheat, rye, barley, oat, and corn).

Adults have been found from late May into August in the Pacific Northwest. It is most common during June and July. It is nocturnal and comes to light.

This species is reported to be a pest of cereal grains in Europe, especially together with other pest species, during drought, or crop planting after clearing of pastures. It is not currently recognized as a pest in North America but has the potential to cause at least minor damage when conditions are right.