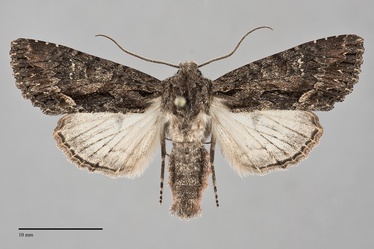 Fishia discors is a medium-sized to large moth (FW length 18–21 mm) that flies in a variety of dry habitats during the fall. It has a very dark gray-brown and dark wine-red forewing with a black median dash, an orange spot at the postmedial line in the fold, and sexually dimorphic white or dark gray hindwings. The outer margin of the forewing is scalloped. Its dark brown color has a slight purplish tint. The wine-colored areas are dominant on the mid-median area, and in most of the subterminal area. The terminal area is purplish dark gray with black streaks between the veins. Black dashes are short and thin at the base, and thicker across the median area in the fold, with a similar mark along the posterior margin basal to the antemedial line. The basal, antemedial, and postmedial lines are partially double, dark gray to black, filled with the ground color. The antemedial line is angled across the forewing, slightly irregular anteriorly and zigzagged on the posterior part of the wing. The median line is black, limited to an oblique line on the costa. The postmedial line has a strong black component abutting the median area and a weak outer component, is evenly zigzagged on the segment near the reniform spot and strongly angled toward and slightly concave toward the base through the fold where it has strong black and light tan components; this segment abuts the orange section of the subterminal area. The subterminal line is a series light tan spots and chevrons, preceded by a series of strong long black wedges between the veins from opposite the cell to near the posterior margin, and followed in the terminal area by the black marks described above to produce a strongly streaked margin with a strong W-mark. The moderately large orbicular and reniform spots are partially outlined in black, lined by a few pale scales, and filled centrally by the ground color. The orbicular spot is oval. The reniform spot is kidney-shaped or weakly hourglass-shaped. The claviform spot is black, with the posterior wall forming part of the median dash. The hindwing of males is white with a slight pink or coppery sheen, with dark gray veins, discal spot, postmedial line, ill-defined marginal band, dark terminal line, and tan fringe; that of females is similar but dark brown-gray. The head and thorax are dark brown with a thin black transverse line across the median collar and dark edges on the tegulae. The male antenna is bipectinate but appear narrow to the unaided eye.

This species can be identified by its dark purplish brown and reddish forewing with a lighter orange, tan, and black mark where the postmedial line crosses the fold and a black median bar. Similar species like Fishia connecta and Apamea burgessi that fly with F. discors in the deserts of southern Oregon are lighter colored (A. burgessi) or have lighter markings such as a pale orbicular spot (F. connecta).

Larva is smooth, green to rosy brown with a thin white lateral line.  It is illustrated by Miller & Hammond (2003) under the name of Fishia evelina.

This species is widely distributed in forest and woodland habitats throughout much of western North America, favoring drier forests and steppe.  It is rare in coastal rainforests west of the Cascades, but is common in mixed hardwood-conifer forests at middle elevations in the Siskiyou Mountains and Cascades.  It is also common in ponderosa pine forests east of the Cascades, but is less common in juniper woodlands. It occurs on open steppe, but is also less common in this habitat.

Fishia discors is widespread and common in the Pacific Northwest as far north as central British Columbia. It is most common and widespread east of the Cascades and occurs as far east as the Idaho Panhandle and adjacent southeastern British Columbia. It appears to be absent from southern Idaho. This moth is less common west of the Cascades, especially north of the Columbia River.

This species is widespread in the American West from the western Great Plains to the Pacific Coast. It occurs throughout California and in the Intermountain Region south of the Pacific Northwest. On the Plains it is found from western Manitoba and central Alberta south to southern New Mexico.

This species is a foodplant generalist feeding on many kinds of hardwoods including cherries (Prunus spp.), spirea (Spirea spp.) and bitterbrush (Purshia tridentata) in the Rosaceae, manzanitas (Arctostaphylos spp.) in the Ericaceae, snowbrush (Ceanothus spp.) in the Rhamnaceae, and elderberries (Sambucus spp.) in the Caprifoliaceae.

Adults fly during the fall, often beginning in August but not peaking until later in September. It is nocturnal and comes to lights.