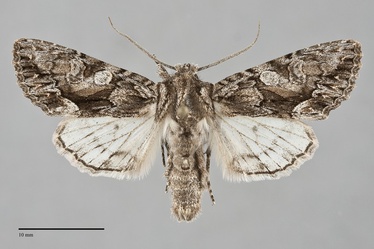 Fishia connecta is a rarely collected, medium-sized moth (FW length 17–19 mm) that flies in south-central Oregon during late fall. It has a gray and light red-brown forewing with black basal and median dashes, a large, pale, round orbicular spot, and a sawtooth pattern near the outer forewing margin, which is scalloped. It is even medium-dark gray, darker gray along the entire posterior margin and in the terminal area and suffused with red-brown in the central median area. The basal dash is long with a diffuse black shade posterior to it. The median dash is also surrounded by a diffuse blackish shade and abuts a strongly angled black and white segment of the postmedial line through the fold. The basal, antemedial, and postmedial lines form double gray marks on the costa. The antemedial and postmedial lines are black adjacent to the median area and lighter gray outside this area. The antemedial line is angled toward the outer margin, is nearly straight across most of the wing but zigzagged near the posterior margin. The median line is diffuse, dark gray, evident on the costa. The postmedial line is weakly scalloped, widely arched around the end of the cell and strongly angled across the fold as described above. The subterminal line is whitish, irregular and strongly serrate on the mid-wing where it reaches the costa. It is preceded by long black spikes in the mid-subterminal area and black lines in the interspaces of the terminal area. The fringe is gray with light spots at the ends of the veins and weak checkering. The orbicular and reniform spots are moderately large and are partially outlined by thin black lines. The orbicular spot is round, filled with light gray. The reniform spot is figure-eight-shaped, filled with light gray peripherally and dark gray centrally and inferiorly. The long black claviform spot is fused to the median bar. The hindwing is white with dark veins and powdery partial postmedial line and marginal bands in males and dark gray in females. Dark terminal lines are present in both sexes and the hindwing fringes are white with a darker base, sometimes with a reddish tinge. The head and thorax are brown-gray with black lines across the collar and along the edges of the tegulae. The male antenna is bipectinate.

This moth can be identified by its late fall flight period, the gray and red-brown forewing, basal and median dashes, and the round pale-filled orbicular spot. Males could potentially be confused with Apamea burgessi, but this species has a darker gray-brown forewing and lacks pale filling of its orbicular spot. Fishia discors, a more common and widespread member of the genus, is much darker on the forewing. The color, median dash, and pale orbicular spot of F. connecta gives the general impression of a very large Oligia divesta, but this species can be distinguished by its smaller size and earlier flight period.

This species flies in low to mid-elevation dry, open sagebrush steppe and open juniper forests. It is rarely collected.

Fishia connecta has been found in south-central Oregon in our region.

This species is rare across its range. The few records shown on the Moth Photographers Group web site are from California and southern Arizona. It is probably widespread in the Intermountain region.

This moth flies during the fall. All Pacific Northwest specimens were collected during late September.