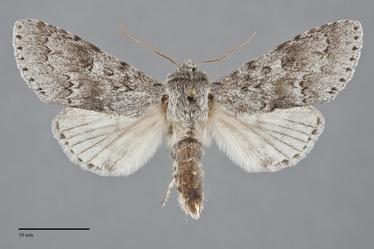 Acronicta insita is a large, powdery, medium-gray moth (FW length 24 - 26 mm) that is found in forests throughout the Northwest and that lacks the forewing dashes that are typical of this genus. The subterminal area adjacent to the postmedial line is usually shaded with gray or brownish gray. The median area is similar due to a diffuse median line that runs through the reniform spots. The basal and antemedial lines are gray and double, but usually incomplete or evident as smudged gray marks. The postmedial line, in contrast, is usually prominent, double with pale gray filling. The inner component is relatively faint, but the outer portion is black, forming a series of lunules between the veins. This line is straight across the distal wing closer to the outer margin than the reniform spot, is drawn sharply toward the base of the wing at the costa and above the fold, and the posterior part is straight to the trailing margin slightly lateral to the position of the reniform spot. The subterminal line is absent, while the terminal line is a series of black spots between the veins that continue as thin lines across the gray fringe. The orbicular spot is variable, absent or a small black oval filled with the ground color. The reniform spot is heart-shaped, gray, but usually incomplete. It is filled with the same dark gray or brown-gray of the median line. The hindwing is white in males, light brownish gray in females, with scattered dark scales, dark veins, very faint gray discal spot and postmedial line, dark gray terminal line that is interrupted by the veins, and a lightly checkered fringe. The head and thorax match the forewing color except that the lateral palpus is dark gray. The male antenna is filiform.

Acronicta insita is nearly ubiquitous in forests in our region, including on both sides of the Cascade Range.

This species is found in northern California and across boreal North America to the Atlantic. It is most commonly found near the Canada-United States border across most of its range, but it is found from Newfoundland to Georgia near the Atlantic Coast. It has been found to central Alberta and Manitoba in central Canada and as far south as western Wyoming in the Rocky Mountains.

This species feeds on various hardwood trees and shrubs, but appears to particularly favor birches (Betula spp.) and alders (Alnus spp.) in the Betulaceae, and willows (Salix spp.) in the Salicaceae as larval foodplants.

Acronicta insita has a long flight season that begins in late May and lasts through the summer. The peak flight is in June and July. It is nocturnal and comes to light.