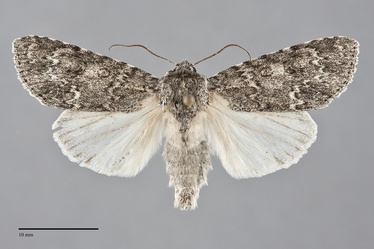 Acronicta impleta is a dull dark gray, large noctuid moth (FW length 20 - 22 mm) that occurs in forests throughout our region during late spring and summer. It has a pattern dominated by the pale filling of the scalloped postmedial line and lacking strong dashes. The forewing is relatively long with a square apex and rounded anal angle. It has a dusty dark gray appearance due to a mix of black, gray, and long white scales. The posterior median area and distal wing opposite the cell and in the fold are slightly darker than the ground color, but no distinct dashes are present. The antemedial and postmedial lines are double, black. The antemedial line is filled with the ground color and is indistinct. The postmedial line is scalloped and filled with whitish gray which is often the most prominent marking. The subterminal line is irregular, similar pale as the postmedial line filling medially and dark gray laterally. A row of black dots between the veins forms the terminal line. The orbicular and reniform spots are black. The orbicular spot is slightly oval filled with the ground color and usually a black ocellus. The reniform spot is a wide kidney shape, filled with the ground peripherally and diffuse dark gray centrally. No claviform spot is present. The hindwing is light whitish gray, slightly darker in females, with darker gray discal spot, veins and thin marginal shade. The fringe is light gray. The head and thorax are powdery dark gray. The male antenna is filiform.

This species can usually be recognized by its long wing, powdery dark gray color, diffuse pattern dominated by the light filling of the postmedial line and subterminal line, and ocellate orbicular spot. Similar Acronicta species are either smaller (Acronicta impressa) or larger (Acronicta insita).

Larva is black and has scoli or tubercles with tufts of hair, including prominent yellow, gray and white tufts at the head and gray tufts at the tail.  It is illustrated by Miller & Hammond (2003).

This species is common and widely distributed in hardwood forests throughout much of North America.  In the Pacific Northwest, it occurs in coastal rainforests and mixed hardwood forests at low elevations west of the Cascades, and in mixed hardwood-conifer forests at middle elevations in the Cascades and Rocky Mountains.  It is particularly common in old-growth forests in the Coast Range and along the west slope of the Cascades.

The Northwest range of A. impleta includes forests throughout most of our region as far north as southern British Columbia. It is common on the west side of the Cascade Mountains. It occurs in forests in northern Washington as well as on the east slope of the Cascades in that state, but is nearly absent from the eastern Cascades and Blue Mountains in Oregon.

The range of this species, like many other species of Acronicta, extends coast to coast in North America. It occurs from southern Canada to Florida and Texas in the East. In the West it has been collected in Alberta, Colorado, and California outside of the Pacific Northwest Region.

This species is a generalist feeding on many hardwood trees and shrubs, but particularly favors Salicaceae including cottonwoods (Populus spp.) and willows (Salix spp.), and Betulaceae including birches (Betula spp.) and alders (Alnus spp.).

This species has been collected from April to August in our region. The peak occurrence is in May and June suggesting a single brood here; the presence of two broods is described for the East in Covell (1984). It is nocturnal and comes to lights.