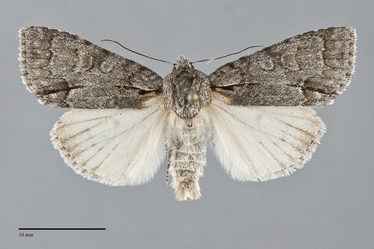 Acronicta grisea is one of two similar medium-sized Acronicta species (FW length 17 - 19 mm) that fly in forests throughout our region during most of the growing season. The forewings are relatively short, with an even gray ground color with a pattern consisting of basal and anal dashes, orbicular and reniform spots, and a black and pale gray postmedial line. Its color is smooth, though slightly mottled medium-dark gray, with slightly darker veins on the distal wing. The black basal dash traverses the antemedial line. It is bordered by a pale line anteriorly, and the posterior portion has a short "branch" in the basal area. The anal dash is long and crossed the postmedial line. The basal and antemedial lines are gray, double, and filled with the ground color. The median line is diffuse and gray, typically slightly darker at the costa and faint across the rest of the wing. The postmedial line is double with faint gray inner and black outer components and pale gray filling. It has a straight strongly toothed segment across the distal wing, is pulled sharply toward the base at the costa and below the reniform spot, and is zig-zagged to the trailing margin posterior to the lateral aspect of the reniform spot with a 90 degree bend near the trailing margin on vein 1A+2A. The subterminal line is pale gray and irregular near the outer margin. A series of black spots forms the terminal line that continue into the fringe to produce a checkered pattern. The orbicular spots are thin and black in outline. Both are relatively large and are closely positioned. The orbicular spot is round with a pale gray inner component and central filling of the ground color. The reniform spot is arrowhead-shaped and is similar to the orbicular spot although the pale inner line is not as light and the black outline is often incomplete. Some specimens has a faint rusty tint in the reniform spot. The claviform spot is absent. The hindwing is white with a slight yellow tint in males, slightly darker yellow-brown tint in females, with a very faint darker shade toward the margin in males, broader and more distinct in females. The postmedial line is evident on the veins. A thin gray terminal line is present. The fringe is light gray with faint gray checkering. The head and thorax match the forewing color, with dark gray on the lateral tegulae. The male antenna is filiform.

This species is similar in color and pattern to Acronicta radcliffei. These species are best distinguished by the shape of the postmedial line near the trailing margin, sharply bent on vein 1A+2A in A. grisea and nearly straight in A. radcliffei. Acronicta grisea is the smaller and more mottled of the these species. In addition, females of A. radcliffei have a dark gray hindwing while A. grisea has a light hindwing with a gray marginal area.

Larva is mostly smooth with fine, sparse hairs.  The color is green with dorsal brown patches.  It is illustrated by Miller & Hammond (2003).

Acronicta grisea is common and widely distributed in forests throughout the Pacific Northwest, including on both sides of the Cascade Range. It is not found in drier steppe regions.

The range of A. grisea extends across the boreal zone of North America from coast to coast. The range extends south to the mountains of New England and New York in the East. It occurs in northern California to the northern Sierra Nevada south of the Northwest region.

This species is a foodplant generalist feeding on many kinds of hardwood trees and shrubs, but particularly favors Salicaceae including willows (Salix spp.) and cottonwoods (Populus spp.) and Betulaceae including birches (Betula spp.) and alders (Alnus spp.)

Acronicta grisea flies during the late spring and summer months. It has been collected from mid-May to late July in our region. It is nocturnal and is attracted to lights.