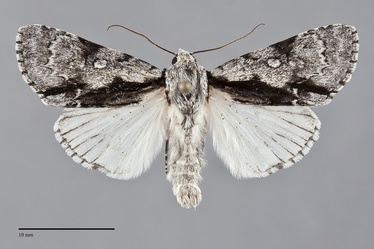 Acronicta funeralis is a distinctive, medium-sized (FW length 16 - 20 mm), gray moth that is found in forests throughout much of our region and flies during the spring and summer. It is black along the trailing margin of the forewing from the base to the outer margin. The ground color is fairly uniform gray, darker in males than in females. The trailing margin posterior to thick black basal and anal dashes is nearly black, producing a long black area that is partially interrupted by the pale filling of the postmedial line. The anterior margin of this dark area extends slightly toward the anterior wing along the antemedial line. A smaller black marked is formed by the median line at the costa. The antemedial line is indistinct except at the costa. The postmedial line is gray, double, with whitish gray filling. It is relatively smooth with mild scalloping between the veins and has a squared-off segment around the reniform spot. The subterminal line is light gray and is sinuous. The reniform and orbicular spot are thin, dark gray, and filled with the ground color or lighter gray. The orbicular spot is oval, usually filled with whitish gray and a central ocellus. The reniform spot is moderately large and boomerang shaped, usually with darker gray filling than the orbicular spot. The claviform spot is not evident against the black background. The hindwing is pure white in males, slightly yellowish with a dark margin in females, with darker veins and terminal line. The fringes of both wings are checkered.

This species can be identified by its gray wing with black along the trailing margin. The most similar species, Acronicta mansueta, is smaller and lacks the black "tooth-shaped" mark along the antemedial line. Its hindwing is white with a dark margin and lacks dark veins like those of A. funeralis. Its orbicular spot is round, not oval, and it has a terminal area that is darker gray than the adjoining subterminal area. Raphia frater is similar in a general sense in that the wing is pale and the basal area and part of the trailing margin are blackish. It can easily be distinguished from A. funeralis because the dark area ends at the postmedial line without reaching the outer margin.

Larva is black with large yellow dorsal spots that have transverse black streaks in the center of each spot, and with scattered long, black hairs with flattened tips.  It is illustrated by Miller & Hammond (2003).

This species is widely distributed in hardwood forests throughout much of North America.  In the Pacific Northwest, it is usually rare and sporadic, but may be locally common at times.  It occupies oak woodlands and mixed hardwood forests at low elevations west of the Cascades, and mixed hardwood-conifer forests at middle elevations in the Cascades and Rocky Mountains.

Acronicta funeralis is found in forests throughout most of our region. No specimens from most of western Washington have been found, although it occurs in the Columbia Gorge and adjacent western Oregon. This species is absent from the dry interior steppe regions.

The range of this species extends across North America and is most widespread in the East. The range limits in the East are eastern Quebec, the Appalachian Mountains in western Georgia, Kansas, and east-central Texas. Acronicta funeralis is found in northern and central California south of our region.

This species is a generalist feeding on a wide variety of hardwood trees and shrubs including Fagaceae, Betulaceae, Aceraceae, Ericaceae, and Rosaceae.

Acronicta funeralis has been collected from late spring through the summer in our region. The records are from mid-May to mid-August. It is nocturnal and comes to lights.