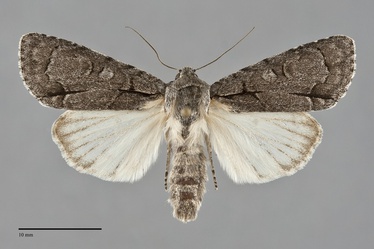 Acronicta radcliffei is the larger (FW length 17–21 mm) and smoother gray of two similar Acronicta species that fly in forests throughout the Pacific Northwest during late spring and summer. The forewing pattern is dominated by black basal and anal dashes, the double antemedial land postmedial lines, and the orbicular and reniform spots. The forewing ground color is even smooth gray with a slight warm tint. A diffuse dark gray patch is located in the subterminal space near the anal angle, and the veins are slightly darker near the wing margin. The basal dash extends beyond the antemedial line and is has a light streak along its anterior base. The anal dash traverses the postmedial line. The basal and antemedial lines are double with equally dark inner and outer components and are filled with the ground color. The antemedial line is slightly uneven and oriented obliquely across the wing. The medial line is gray, faint, and smoothly arced across the wing when entirely visible. The postmedial line is double with faint gray inner and black outer components and filling of whitish gray. It is smoothly convex around the reniform, sometimes with a slightly concave segment near the end of the cell, is drawn sharply toward the wing base at the costa and above the fold, and is smooth and nearly straight to the trailing margin below the lower end of the reniform spot. The subterminal line is diffuse pale gray, producing a slight marbled effect near the wing margin. The terminal line is a series of dark gray dots between the veins that continue into the vein to produce a slightly checkered effect. The orbicular spot is round with a thin black outline, whitish gray filling, and central ocellus of the ground color. The reniform spot is relatively large, kidney, or heart-shaped with an incomplete black outline and inner pale gray line. The spot is usually incomplete with a strong medial wall and faint lateral portion. The spot is traversed by the dark median line. There is no claviform spot. The hindwing is sexually dimorphic, pale whitish with a slight yellow tint in males and brownish gray in females. The discal spot, veins, and outer margin are darker gray in both sexes. The fringe is gray, slightly darker than the wing margin. The head and thorax are gray with a dark gray band across the anterior moth formed by dark on the palpi, the anterior thorax posterior to the eyes, and the lateral edges of the tegulae. The male antenna is filiform.

This species is similar to Acronicta grisea, a widely distributed species in our area, but is slightly large and smoother and warmer gray. These species can be distinguished by the shape of the postmedial line above the trailing margin. That of A. radcliffei is straight across vein 1A+2A while the line is bent 90 degrees, apex toward the outer margin, in A. grisea. The hindwings of females of A. grisea are pale with a gray margin, unlike the entirely dark hindwing of females of A. radcliffei.

Acronicta radcliffei is widely distributed in forests of the Pacific Northwest. It appears to be absent from western Washington but is found west of the Cascade Mountains in Oregon. It has not been found in the mountains of the Basin and Range province in southeastern Oregon and southern Idaho.

This species is found in Alberta, northern California, and the central Rocky Mountain states of Colorado and Utah in the West outside of the Northwest. It is widely distributed in the East where it has a more southerly distribution than A. grisea, ranging from Newfoundland, southern Quebec, and New England to Georgia, Illinois, and Kansas.

Acronicta radcliffei flies has a long flight season in the Northwest and has been collected from April to early September. It is most commonly found in June and July. This species is nocturnal and is attracted to light.