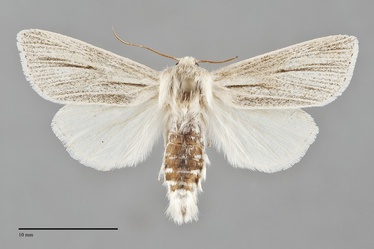 Acronicta insularis is a pale grayish tan, medium-sized moth (FW length 16 - 20 mm) that flies in wetlands in interior steppe throughout most of the collecting season. It has a white hindwing and a forewing with a longitudinally streaky pattern dominated by dark marks at the base and distal to the cell. The apex of the wing is slightly pointed. The streaked appearance is due to pale veins and pale streaks between the veins. The wing has slightly darker streaks at the apex, in the posterior cell, and trailing margin. A dark basal dash is separate from the cubital vein. A dash-like dark mark near the end of the cell is less distinct than the basal dash in most specimens. The spots and transverse lines are absent. The hindwing is usually white, rarely light gray with a pale fringe.

This species resembles several other streaked moths that are found in grass or sedge habitats, including Benjaminiola colorada and Leucania species. Benjaminiola colorada lacks dark streaks on the wing and has a dirty pale gray-brown hindwing.  Leucania anteroclara, which has a white hindwing like A. insularis, has a long dark mark abutting the posterior cubital vein, which is white. The cubital vein of A. insularis is similar to the other veins and is difficult to pick out against the background. Additionally, its basal dash is separate from the vein. The eye of L. anteroclara is covered with fine hairs, while that of A. insularis is bare.

This species is widely distributed in marshes.  In the Pacific Northwest, it is mostly limited to marshes and riparian zones along creeks and rivers at low elevations east of the Cascades.

Acronicta insularis is found in the dry interior steppe regions of eastern Washington, southeastern Oregon, and southern Idaho. It has also been collected in southeastern British Columbia.

The range of A. insularis extends across the United States from Coast to Coast. The northern limits are in southern Canada, reaching furthest north in central Alberta. It occurs from Peninsular Florida to coastal southern California across Texas and southern Arizona.

This species is a foodplant generalist feeding on a wide variety of marsh vegetation such as cattails (Typha spp.) in the Typhaceae, sedges (Carex spp.) in the Cyperaceae, knotweed (Polygonum spp.) in the Polygonaceae, and willows (Salix spp.) in the Salicaceae.

The phenogram for A. insularis demonstrates a bimodal distribution with peaks in May and June and again in August suggesting that it is double-brooded in our area. This species is nocturnal and comes to lights.